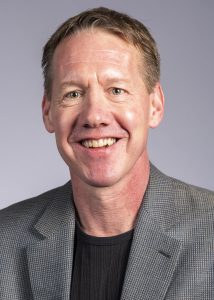 Dr. Steven Keller grew up in the great Pacific Northwest and graduated from Pacific Lutheran University (BS) and the University of California-Berkeley (PhD). Steve has been on the faculty of the Department of Chemistry at MU since 1995 where he currently serves as Associate Professor, Associate Chair for Undergraduate Studies, and since 2015 has directed the Missouri Scholars Academy. Steve has taught extensively in the Honors College, developing courses in the history of science, a class on the intersection of science and politics, and a climate change tutorial. In 2009, a chance meeting with Carl Edwards sparked an interest in NASCAR and the science behind racing, and Steve has developed a seminar on the Chemistry of NASCAR. Steve’s time away from campus is focused on being husband to Amanda and dad to Lindsay Grace (11) and Liam (5), and watching a bit of soccer here and there (he is the cousin of Kasey Keller, former goalkeeper for the U.S. National team).