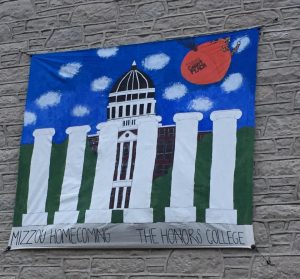 A banner featuring Truman the Tiger flying on a giant peach over Jesse Hall and the Columns was displayed on the side of Lowry Hall for Homecoming.

To kick off the festivities, student ambassadors designed a banner featuring Truman the Tiger flying on a giant peach over Jesse Hall and the Columns. The banner was displayed on the side of Lowry Hall throughout Homecoming Week.

Members of the Honors community donated blood at the Homecoming Blood Drive on behalf of the Honors College in the days leading up to Homecoming weekend. The week-long event is the largest college-based blood drive in nation, and this year MU raised 4,374 units of blood for hospitals in mid-Missouri.

The Honors College teamed up with Yellow Dog Bookshop in downtown Columbia as part of “Decorate the District” on the Friday of Homecoming Week. The collaboration highlighted the importance of reading books. Groups and organizations from across campus spent the day covering storefronts downtown with paintings connected to the “A Tail of Tradition” theme. Honors College student ambassadors painted a “Truman and the Giant Peach” themed image onto Yellow Dog’s windows. 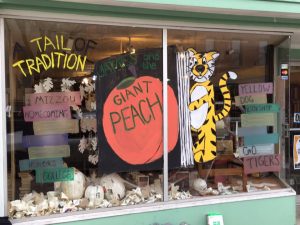 Homecoming brought masses of MU graduates back to campus. A breakfast was held in Lowry Hall on Saturday morning to celebrate the Honors College alumnus in town for Homecoming weekend. Attendees reminisced on their time at MU over scrambled eggs and bacon before heading off to the parade.

Continuing with the overarching theme of books, the Honors College partnered with Scholastic to hand out over 1,500 children’s books to the Homecoming parade. Staff members, ambassadors and members of Honors Learning Communities walked in the parade and distributed the books to families and children watching from the side.

After a successful weekend, the Honors College looks forward to participating in future Homecoming festivities for years to come.