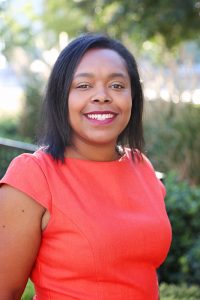 Beavers is no stranger to Mizzou. She earned a bachelor’s degree in English and graduated with honors from MU before earning a law degree and master’s in public health degree from the University of Michigan.

During her time at Mizzou, she was very active on campus both academically and extracurricularly, living in the Honors Learning Community, serving as the student coordinator for the Freshman Interest Groups (FIGs) program. She was a member of the Chancellor’s Leadership Class, the LSV and Mortar Board honors societies, among other activities.

“I did all the wonderful and fun things you can do on campus,” Beavers says. “I learned from some great professors and still have many close friends from here. I loved my time at Mizzou.”

Upon graduating from MU and heading to Michigan, Beavers continued her campus involvement as an editor of the Michigan Law Review and a student advocate for the Pediatric Advocacy Medical-Legal Cooperative Clinic.

After law school, she went to Washington, D.C., to work at a large international law firm where she focused on healthcare law and litigation, representing large corporations. After three years, she left to work for the Department of Justice as a Trial Attorney where she sued large companies that defrauded the government. She has earned special commendation for her work on behalf of U.S. taxpayers during her time at the Department of Justice.

“I’ve been doing that for the last eight years and I really liked it. It was challenging, but I got to recover money for the taxpayers,” Beavers says. “It was intellectually interesting, but also I felt like I was making an impact, which I think is important in a career.”

As Beavers reflected on her career and pondered her next step, she happened upon the posting for the Honors College Associate Director job.

“I read it and thought, ‘It blends a lot of the things I love.’ It’s academic in nature so it deals with learning and being challenged, and helping students which I really look forward to,” Beavers says. “I also get to give back to a university which made a real difference in my life. And, I think the Honors College is uniquely situated to really impact students both inside and outside the classroom.”

Beavers is adjusting to this new chapter of her life and introducing her husband and their two young daughters to Columbia.

As part of her job responsibilities, she will serve as the Associate Director for Missouri Scholars Academy, the statewide summer program for Missouri’s most high-achieving high school students. Beavers participated in this program herself when she was a 15-year-old high school student in Kansas City, Missouri, and went on to work as a staff member for the program when she was a student at MU.

Beavers looks forward to using her wide range of academic and professional experiences to be an advocate for all students within the Honors College.

“I was pre-med, I have an English degree and I went to a professional school, so I think sharing those experiences with students will be really useful in being thoughtful about all of the different courses that will be available for them,” Beavers says. “There are so many amazing resources on this campus, and great professors and great students, so being able to bring them all together will be a welcome opportunity.”