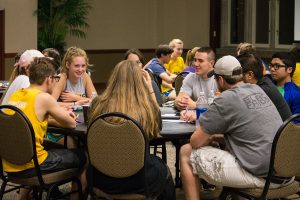 The Honors College hosted its second annual Geek Week from Oct. 31-Nov. 4. Throughout the week MU students were encouraged to indulge in all things geeky and nerdy while enjoying free food and time with friends. The week’s events were planned and coordinated by the Honors College Student Ambassadors under the guidance of adviser Kristina Bradley. All students across campus were welcome to attend Geek Week events, but the main focus of the week was to promote a stronger and more vibrant honors community on campus.

Here’s a look back at the fun.

The week kicked off with an “Hon Con.” MU’s “nerdiest” clubs, organizations and groups came together to table in Stotler Lounge and answer students’ questions. Representatives from professional development organizations and student resource groups such as the RSVP Center and the LGBTQ Center were also in attendance. Free t-shirts and other giveaways were handed out, and students who dropped by were eligible to win prizes later in the week.

That evening, the Honors community celebrated Halloween with the Monster Mash Costume Ball in Stotler Lounge. The dance was co-sponsored by the Schurz Hall Honors Learning Community and the Honors College, and food, drinks and music were provided. Students were encouraged to wear their Halloween costumes and there was a contest for best costume.

Trivia Night was held in Stotler Lounge on Tuesday evening and attendees were asked to bring a non-perishable food or packaged toiletry item to be donated in order to enter the tournament. Pizza and Halloween candy were provided and students were encouraged to bring friends to create a team. Each team picked a team name and competed to win the most points by correctly answering various categories of trivia questions. Winning teams were announced after two hours of learning and laughter. The winning teams choose prizes at the end.

The annual “GeeksSpeak” series kicked off on Wednesday afternoon with Dr. Candace Korasick’s discussion about gender roles in the shows Avatar: The Last Airbender and The Legend of Korra. Korasick teaches an Honors course this semester called “Personal Identity,” in which students learn about different theories of human identity and then watch episodes of Avatar: The Last Airbender to analyze how those theories manifest themselves in the characters.

“I watch a lot of animation, and most of it, from a feminist point of view, is disappointing. The Avatar series, both The Last Airbender and The Legend of Korra, have been so fiercely feminist,” Korasick says. “The creators of Avatar once said in an interview, ‘The thing is, half the people in the world are women, so why wouldn’t half our characters be women?’ They have worked so hard to make sure that there are all kinds of men and women with all kinds of abilities, as well as good guys and bad guys who are men and women. It’s just been amazing.” Students gathered in the Honors College for the discussion, and asked questions and conversed about gender roles.

Game Night was held in Stotler Lounge on Wednesday evening and once again teams were formed and food was provided. Students had the opportunity to play a variety of games including board games, card games and even electronic games. The night was full of camaraderie, laughter and, of course, friendly competition.

Thursday Nov. 3 – Geek Speak and Get Your Vote On

Thursday brought another Geek Speak installment, this time with Angela Speck, a professor and director of astronomy. Speck answered questions, talked about her work and explained why Pluto isn’t a planet. Speck runs Laws Observatory on campus, which is currently preparing to next year’s total solar eclipse. The eclipse is on track to fall over Missouri, so Speck used part of her discussion to prepare students on what to expect.

Get Your Vote on took place Thursday evening in the Student Center, and was catered by The Shack. The informal dinner and dialogue session served as a time for students to voice their opinions and concerns over the election cycle. A panel of camps and community leaders were present to help facilitate the discussion, including Honors College alumna Sheela Lal, Research Director for Progress Missouri. Attendees got a chance to not only talk about politics on a national level, but on a state and local level as well.

Geek Week came to a close on Friday with two relaxing events for students. Geeky Crafternoon in Lowry Hall allowed attendees a time to de-stress from the busy semester through crafting. Students made felt drinking sleeves, bookmarks and other miscellaneous crafts such as rock magnets. Candy was provided and everyone present was encouraged to get to know one another.

That evening, The Honors College promoted the $1 Movie for the week, sponsored by the MSA/GPC Department of Student Activities. The movie was Ghostbusters, which fit in well with the nerdy theme of Geek Week with its passionate fan base and focus on the paranormal.

Keep an eye out next fall as Geek Week returns with another series of activities and opportunities that celebrate our inner geek.