Landing internships, building resumes and traveling abroad are all part of being a college student. Finding a place to start can be daunting for many, but junior Maddie Niemann had no problem figuring that out.

Niemann is a pre-med, political science and international studies major from Blue Springs, Missouri. To date, she has already had four internships and continues to look for more. 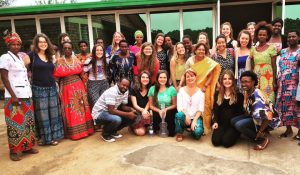 Her first internship was with Foundation for the Higher Good, a Columbia non-profit organization with which she was placed through the Civic Leaders Internship Program. Following that experience, she interned with The Missouri Department for Economic Development. Neimann’s research during that internship was actively used by the department to make energy usage more efficient. That experience gave her a new sense of confidence that led to her landing an internship with Missouri Senator Claire McCaskill.

“I found an email about the senator internship about a week before school started,” Niemann says. “I was like ‘yeah, I’ve had an internship before, I can do this.’”

The internship gave Niemann an inside look at the issues the government deals with on a daily basis. One of her many responsibilities was to work with universities in Missouri to strengthen Title IX policies.

“It bolstered my perspective on how women stand in government as a whole. It was a lot of traveling and a lot of talking to constituents and relaying it to back to the senator,” Niemann says. “Overall it was a fantastic opportunity to learn more about Missouri and its unique political struggles.”

Last summer, Niemann took the knowledge and experiences she has gained through her internships and applied it on a global level. She traveled out of the country for the first time to work as a health services volunteer in Rwanda.

Niemann found out about the opportunity after forming a close relationship with associate professor Béa Gallimore in the department of romance language and literatures. Gallimore is the founder and president of Step Up! American Association for Rwandan Women, a non-profit that assists female survivors of the 1994 Rwandan Genocide.

“I have known Maddie for more than three years,” Gallimore says. “She is an excellent student whose dedication goes beyond the classroom to help those in need. Throughout the course, including several visits to genocide memorials, she was not just an observer; she was very engaged and concerned. These traits transpired in her pertinent questions through the lectures and her remarks through the debriefing sessions after visits to genocide memorial sites and meeting with genocide survivors.” 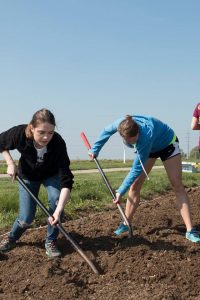 Maddie Niemann plants asparagus at Jefferson Farms as part of a volunteer activity with the MU Environmental Leadership Office.

For the entire month of June, Niemann worked with Partners in Health and with a local hospital. Simply working there gave Niemann insight into Rwandan healthcare. However, she gained firsthand experience of the healthcare system when her roommate came down with dysentery.

“I spent a week or so in the hospital with her,” Niemann says. “That was definitely insight into the Rwandan healthcare system, but not the kind that you necessarily wish on anyone. Just seeing the different kinds of treatment people have available to them based on nothing more than where they’re born drives me crazy.”

Bill Folk, a professor in the department of biochemistry, was the one who helped change Niemann’s mind. The two met through Discovery Fellows, a program run through the Honors College that allows undergraduates to perform research with faculty.

“Being able to guide and to learn from students like Maddie is what makes me come in early and stay late each day,” Folk says. “Creative, thoughtful and passionate students are an inspiration.”

In one of her labs with Folk, Niemann worked on researching a plant that is correlated with serious health problems and is commonly used to treats AIDS patients in Africa.

“I realized there are a lot of issues with finding a happy medium between Western medicine and non-Western medicine,” Niemann says. “We really talked about the bigger challenges to public health that fall under more of the political science and international studies umbrella.”

Since changing her major, Niemann has spent her time seeking opportunities on campus to further her passions. Currently, she is a coordinator for Paws for a Cause, an ambassador for the Environmental Leadership Office and a volunteer at Tiger Pantry. She also works with the Mizzou Energy Coalition to divest from using fossil fuels. In whatever spare time she can find, she spends it writing, enjoying the outdoors or playing the guitar, tenor sax or piano.

It’s a wonder how any one person can fit all that into their schedule while taking 20 credit hours, but Niemann somehow makes it look easy; a feat she chalks up to the help she gets from her friends, family and role models.

“It’s really about having a support network,” she says. “The people I work with in labs, my professors, everyone at my jobs; just having people that really want to see you succeed gives you the motivation to fit it all in somehow.”

After graduation, Niemann has plans to go to the Peace Corps, and then on to medical school to continue working toward her goal of creating a more equitable world.