In June of 1993, just before his junior year of high school, my dad, Chad Ennis, participated in Missouri Scholars Academy at the University of Missouri. That experience represented his first introduction to higher education. It was there that he met Dr. Ted Tarkow, who coincidentally enough, would also become one of my professors at MU when I started college at Mizzou this past August.

In 1985, Dr. Tarkow helped found the Missouri Scholar’s Academy (MSA), a three-week residential and academic enrichment program for 330 of Missouri’s brightest high school juniors. After observing governor’s schools on the East Coast, Tarkow worked with educators across the state to create a similar program for Missouri’s gifted youth. Eight years after the program’s creation, my dad would attend MSA as a student. While at MSA, my dad had the chance to take many interesting classes, including one called Sailing to Byzantium. This class focused on Byzantine art and asked students to consider the meaning behind art pieces.

“The Scholars Academy is a great program for young Missouri teens,” my dad said. “It was so meaningful for a small town kid to have the opportunity to spend three weeks at Mizzou learning about things that just aren’t taught in high school.”

Through all the classes, programs and the events of MSA, Dr. Tarkow was someone my dad thought had a passion not just for teaching the classics, but also for providing unique educational experiences to students who wouldn’t otherwise have them. Before I began my freshman year at Mizzou, my dad repeatedly told me: “If you have the chance, take one of Ted Tarkow’s classes.” 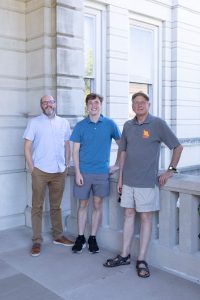 Dr. Tarkow began the very first class I took with him, Gn Hon 2111H: Epic Destinies, Individual Journeys, by speaking to us in Greek. By the end of that hour, it seemed as if Dr. Tarkow had known each of us far longer than 50 minutes. Now, I realize why my dad encouraged me to take Dr. Tarkow’s class. He has an intense passion not only for the literature, art and philosophy he teaches, but also for the experience of the students in his classes. Simply put, Dr. Tarkow’s continued involvement and teaching at Mizzou makes this university a better place.

When I interviewed Dr. Tarkow, we talked about his experience as a teacher at MSA and in the Honors Humanities Sequence, along with all things Mizzou. Like Dr. Tarkow’s class, our interview was fun, new and unconventional. Dr. Tarkow decided he wanted to take me somewhere “on campus [I’d] never go again.” We set off from his office and trekked to the physics building. As a journalism student, I could spend years at MU and rarely enter the physics, chemistry and biology buildings. This was not true for Dr. Tarkow, who knew the layout of every building we entered. We popped into a few classrooms and lecture halls, even passing a wall of stuffed birds at one point.

Everywhere we went, Dr. Tarkow had a friend. We would stop and chat with each of them, exchanging jokes and checking in with everyone. Wherever we went, there was always a student or staff member Dr. Tarkow knew well.

Without Dr. Tarkow’s tour, I might have completely missed an intriguing and special part of Mizzou’s campus. If I learned one thing about Dr. Tarkow from our conversation, it’s that he has an unmatched love for the Mizzou community. Whether it’s kickstarting a fun and inventive program for bright scholars or showing an awkward freshman around campus, Dr. Tarkow gives students and this university his all.

In the near thirty years since my dad attended MSA, Dr. Tarkow has likely changed a lot. However, after hearing about Dr. Tarkow from others, I’d be willing to bet that the MSA pioneering Dr. Tarkow of 1985 is not as different from 2021’s super-professor as we may think. His love of education and the MU community as a whole was evident during our conversation around campus and is clear to everyone who meets him.

During Parent’s Weekend at Mizzou, Dr. Tarkow reconnected with my dad. We got the chance to chat for a bit and, when the conversation ended, my dad remarked: “He’s one of the nicest people I know.” I couldn’t agree more.