Susan Geisert has seen thousands of students come through her door over the course of her 35-year career as an academic adviser. She’s worked with students who didn’t have any inkling of a plan, and students who had their entire lives mapped out. She’s celebrated alongside students who had been accepted into their top choice graduate programs, and comforted students who received rejection letters on the first try. 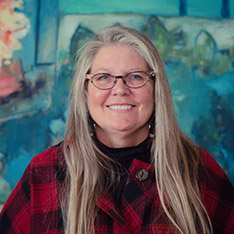 “This can be a very defeating process,” Geisert says of the student application and interview process for health professions graduate programs. “Just being able to help a person feel better about themselves at the end of a meeting and say, ‘Look, this is the plan, this is what we are going to do and this is going to help,’ is something that I really look forward to.”

Though Geisert loves her job, she never actually planned to become an academic adviser. As a high school student in Kearney, Nebraska, she worked on the newspaper and yearbook staff and later went on to pursue an education in journalism at Oklahoma State University.

She received a bachelor’s of science degree in news editorial journalism and began working toward a master’s of science in mass communications. She was teaching news reporting labs and focusing on finishing her degree when the academic adviser position in OSU’s School of Journalism opened up.

“The department head came to me and said ‘We really think you would be a really good fit for this job,’ and so it just kind of fell into my lap,” Geisert says. “It’s just one of those opportunities that comes along that you can’t pass up.”

As the sole adviser for the entire OSU School of Journalism and the coordinator of all internship and scholarship programs, Geisert dealt with about 800 students at one time. She stopped teaching classes to focus all of her energy on advising.

“I still feel like as an academic adviser, you’re teaching every day,” Geisert says. “It’s just another form of teaching and delivering the information. In this position, we do a lot of workshops, and there’s a plan and a goal at the end. I’m teaching life skills.”

Geisert left OSU 10 years ago after her husband took a job as division director of animal sciences at Mizzou. She thought she considered not working after the move to Columbia, but after three months, she decided she missed advising too much to stop for good.

“You miss that interaction with students. It becomes a part of your daily life and it’s just one of those things that you really enjoy,” Geisert says.

She submitted an application for an open position in the MedOpp Advising Office and got the job. The switch from journalism advising to pre-health professions advising was a bit of an adjustment, but she drew on her prior experience to adapt quickly to the demands of her new role.

“My journalism background became very important in this position because students applying to medical and dental school do have to have strong communication and writing skills,” Geisert says. “So I help a lot of students with their personal statements and all of their secondary essays.”

Geisert’s journalism background proves to be helpful in other areas as well, such as advising students who are interested in both journalism and health professions.

“I definitely have some journalism students who are also pre-med, so they have to work a tremendous number of science courses into a curriculum that doesn’t really require any science,” Geisert says. “It takes some really careful planning.”

Geisert also sees incoming journalism freshmen who come into the Honors College during Summer Welcome for their first advising appointment.

“I love when these students come in and say they’re interested in news writing or magazine,” Geisert says. “I always say, ‘I have two degrees in that and this is what I do for a living.’ Journalism is one of those things that you can take in a lot of different directions because those good writing and communications skills can take you anywhere.”

Among Geisert’s favorite things about MU are the school traditions, the restaurant, entertainment and cultural scenes that Columbia has to offer, and her job in the MedOpp Advising Office.

“This is the kind of job that’s a win-win,” she says. “You have those interactions with young people, getting to help them reach their goals and getting to know them. And then the satisfaction that comes from even just helping someone feel better at the end of a meeting makes you feel good about what you do.”