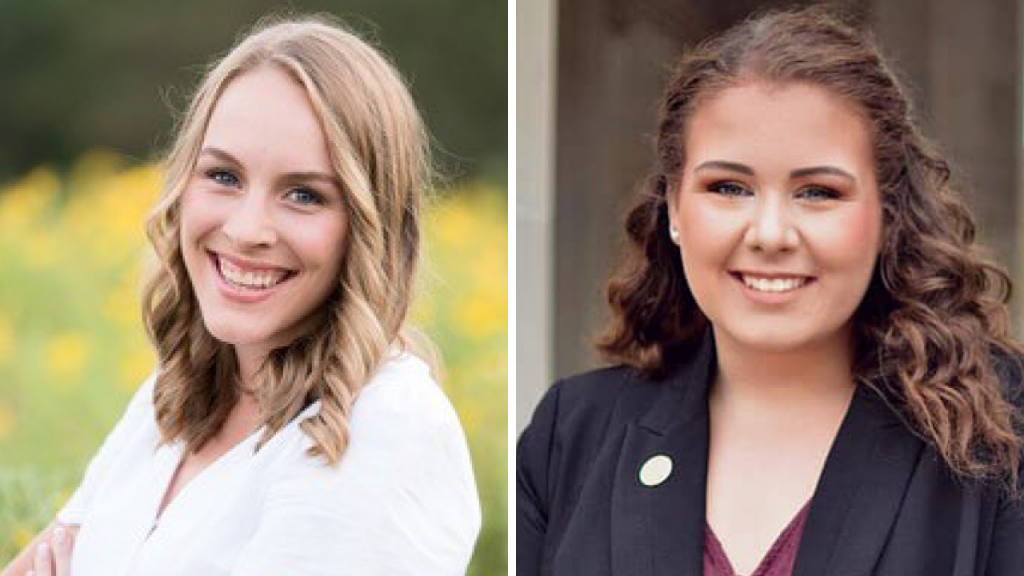 Jessica Blake and Claire Shipp will learn whether they are selected to receive the Truman Scholarship April 14, 2021.

Truman Scholars define the University of Missouri’s core values of Respect, Responsibility, Discovery and Excellence. But when asked to describe her Mizzou experience, Claire Shipp might add a fifth descriptor: Awesome. As in “ASUM.”

In early April, Junior agriculture business major Claire Shipp (Chillicothe, Missouri) received a call at 7:50 a.m. from UM President Mun Choi, who informed Shipp that she had been selected to be a recipient of the 2021 Truman Scholarship. This highly competitive award honors undergraduate students with outstanding leadership potential, academic excellence and a commitment to public service with up to $30,000 to use towards their graduate education.

“It was really exciting,” Shipp says. “It was really fun to share the news with the people who supported me and to get to thank them for all the hard work they did in recommending me and supporting me throughout this process.”

Shipp joins 61 other juniors selected for the award from a pool of 845 candidates across America. She credits the Associated Students of the University of Missouri (ASUM) with being a major factor in her selection for the award.

‘“(ASUM) has been the best thing that’s ever happened to me,” Shipp says. “It definitely changed the trajectory of my college career and got me interested in public service, which is what led me to the Truman Scholarship.”

Shipp is a leader on campus through organizations like the Intercollegiate Student Council, Collegiate Farm Bureau, Alpha Delta Pi sorority, National Agri-Marketing Association, and Mizzou-Thon. She currently serves as the Executive Director of ASUM. Shipp has been involved with ASUM since freshman year and currently manages a legislative team of ten students from across the UM system that works to advocate on policy at the Missouri state capitol.

Junior journalism major Jessica Blake (Dublin, Ohio) was a finalist alongside Shipp for the award. The Truman Scholarship stuck out to her because of its commitment to public service. Her parents, a principal and a nurse, taught her what it means to put others before herself through career choices and actions.

“I grew up in a home of public service, so it was something that came naturally for my career,” Blake says. “It was a big part of why I chose to pursue a career in journalism.”

Blake is involved on campus with the Stamps Scholars Program, Young Life, Mizzou Admissions, Diversity Peer Educators, and she is co-president of Mizzou Women in Media. She is a reporter for the Columbia Missourian and interns for the  Reporters Committee for Freedom of the Press in Washington, D.C.

“By selecting me as a Stamps Scholar, the Honors College helped me to see my potential and to believe in my capabilities and the difference I could make,” Blake says. “I don’t think I would have even considered applying for Truman without the platform the Honors College provided for me to grow in self confidence and to dream big.”

Shipp remembers the Truman Scholarship application allowing her to hone in on her hopes for the future. The process encouraged her to reflect on her goals and envision where she hopes to make change through her career.

“Being selected as a part of the 2021 cohort with these individuals is so humbling,” Shipp says. “Additionally, this application process helped me to discover my true passion for using agriculture as a solution to our current climate crisis. I am confident that my paper application and the interview were true to who I really am, which makes this award so much more meaningful. The fact that the selection committee saw potential in me to be a valuable public servant is so encouraging. ”

The Truman Scholarship application process took a great deal of time and effort from applicants — a lengthy process made up of several essays. The Mizzou Office of Fellowships and Advanced Studies (FAS) was there to help Blake and Shipp each step of the way.

“We really talk with students about how their writing skills will improve, and we work with them to develop their interview skills,” says Rachel Newman, interim director of FAS.

Blake credits Newman as her biggest cheerleader throughout the Truman application process.

“Rachel spent the time getting to know me, asking all the right questions and providing me with a sense of structure that helped me to unpack and declutter my thoughts, resulting in an incredible sense of clarity and confidence I’ll carry with me as I enter this next phase of life after graduation,” says Blake.

FAS assists students applying for nationally competitive awards and those on the pre-med track. While FAS celebrates the victories of each student, the office believes that success for its students is not defined by whether they receive an award.