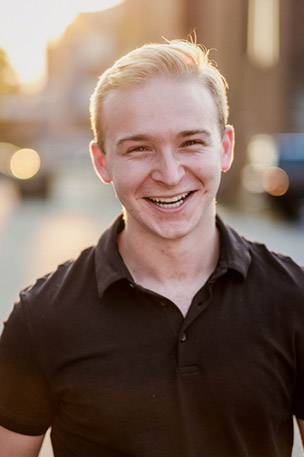 On Wednesday night, he’s a stand-up comedian on a small stage, looking out at the shadowed faces of fellow Mizzou students and joking about life’s trivial problems. By Thursday morning, he’s back to hitting the school books, running his new business, attending organization meetings, working at MOJO Ad and giving tours to prospective Mizzou students.

Kyle Gunby, a senior Honors student who is majoring in journalism with an emphasis in strategic communications, along minoring in business and theater, has a wide variety of interests that have shaped his undergraduate experience at Mizzou and extend into his future career goals.

After getting involved in Greek Life as a freshman, Gunby joined a number of organizations including the Missouri Student Association, Tour Team and Summer Welcome, among others.

“For me,” Gunby says, “Greek Life was always not only a great way to find a home base here on campus, but it was also something I saw as a jumping-off point.”

That home base has since led him to co-found Threadbare, a gender-neutral thrift store located inside the MU Student Center.

“There are a lot of people here on this campus who are gender-neutral or who do not exist in traditional places on the gender spectrum,” Gunby says. Threadbare gives those students a safe space to shop and embraces non-gendered self-expression.

The business has enjoyed more than just financial success. It’s peaked the interests of students and encouraged them to learn more about gender neutrality, contributing to casual acceptance and normalization of different identities.

While the business and his many organizations consistently keep him working 12-hour days, he never lets his commitments get in the way of his favorite activity—Comedy Wars.

Having grown up with a love for the stage, Gunby is passionate about his role as co-captain for this group, which he says greatly benefits his mental health.

“It’s such a rare opportunity to come in the middle of the week and say, ‘Yes, I have these tests,’ ‘Yes, I have this problem with my boyfriend or girlfriend,’ ‘Yes, I have all this stuff going on in my life that is so cumbersome.’ But we come together on Wednesday night for one hour. We all relax and we laugh at these problems and realize that, in the grand scheme of things, some of this doesn’t even matter.”

While Gunby readily realizes the insignificance of some of these problems, he maintains a passion for things that do—his academic and career goals.

“Kyle cares just as much about his academics and the impact he’s making as the gold nametag he’s wearing,” close friend Gunnar Johansen says.

Indeed, Gunby sees his studies of strategic communications as a starting point for creating change in the world. By using his strong communication skills in a more subjective manner, he can continue taking stances on issues that he sees as important to society.

While he doesn’t have firm post-graduation plans, he hopes to extend the many experiences he’s had at Mizzou to not only maintain his inclusivity efforts, but also to continue making people laugh and feel better about life.

How that will happen, he doesn’t quite know, but he’s willing to take a chance.

“I’m a firm believer that when opportunities present themselves, you just take them and worry about the collateral damage later,” Gunby says.