The MU Honors College welcomed more than 1,000 first-year honors students (a record in its 61-year history) to Mizzou Aug. 15 for the annual One Read Symposium at the Missouri Theatre.

The Honors One Read program, now in its sixth year, features a work that incoming honors students are expected to read and includes an intellectual conversation about the work. This year’s One Read work, selected by a panel of honors faculty and students, is The Great Believers by Rebecca Makkai. 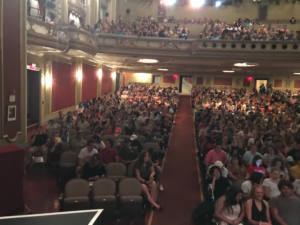 MU Honors College gathered at the Missouri Theatre for the One Read Symposium.

The novel tells the story of the incredible hardships during the AIDS crisis of the 1980s, paired with a subplot of a mother’s search for her daughter in 2015. Both storylines show the tough realities of loss, grief and ultimately acceptance. The Great Believers has won numerous awards, including being named one of The New York Times Book Review’s 10 Best Books of 2018 and a finalist for the Pulitzer Prize in Fiction.

Makkai talked to students about the process of writing the novel, developing ideas for a storyline and the extensive research she conducted to ensure accuracy.

“You might not realize — and I didn’t until a certain point in my writing — how much of fiction is research-based,” Makkai said.

Makkai said she wanted the book to take place in her hometown of Chicago because it was familiar to her and because Midwest cities often have AIDS crises that are less publicized than coastal cities. After reading biographies of artists from the 1920s, searching Chicago archives for information on the local AIDS narrative and interviewing those who were present during the AIDS crisis, Makkai said she finally realized how her areas of interest could become a cohesive plot. 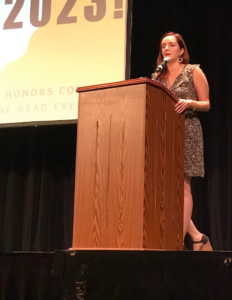 Rebecca Makkai is the Chicago-based author of several award-winning novels.

Freshman journalism major David Tallant said he enjoyed the novel and Makkai’s talk, and he was particularly interested in hearing about how Makkai wrote historical context into the novel.

“I didn’t know the historical background of the AIDS crisis, so it was really interesting to hear what she had researched,” Tallant said.

Following the event, students enjoyed a picnic with food from Panda Express, owned by Mizzou alumni Andrew and Peggy Cherng, and had the opportunity to learn more about involvement in the Honors College. Makkai joined students at the picnic to answer questions and stayed for more than two hours signing copies of her book.

The One Read Symposium is only the beginning of the conversation surrounding the AIDS crisis. Honors students will continue discussing the novel in FIG groups, writing about it for an essay contest, and taking part in numerous other academic, co-curricular and informational events related to the novel’s themes.