This semester, the Mizzou Honors College added a programmer, anthropologist and globe trotter to its academic advising staff. 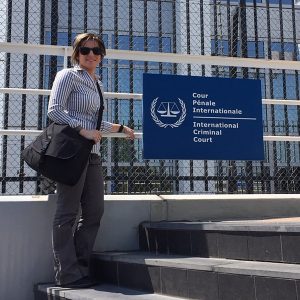 Shanay Murdock, the newest academic advisor at the MU Honors College, stands outside of the International Criminal Court in the Hague, Netherlands.

Shanay Murdock, a graduate of Northern Illinois University (NIU) (where she was also an honors student), hopes to help Tigers get the most out of the university experience.

“It’s a great opportunity to work with students,” Murdock says. “My college experience was different than most. I was older than many of my peers and I had a late start for college.”

When it was time to embark upon a career, Murdock was drawn to peer mentorship, a path that seamlessly merged with academic advising.

An anthropology major as an undergrad, Murdock also has a master’s in genocide studies from the University of Amsterdam. She is currently an MU graduate student in data science and analytics.

“Anthropology instilled in me a desire for lifetime learning,” Murdock says. “It’s such a broad field that it can apply to anything. You walk away with a desire to continue learning beyond the classroom.”

While at NIU, Murdock worked a one-semester internship at the NIU Museum of Anthropology and studied abroad in Amsterdam.

Murdock’s focus is forensic anthropology, which often includes identifying the remains of victims of political violence buried in mass graves and returning them to family members.

Murdock interviewed for her job during the spring 2020 semester a week before Mizzou pivoted to online classes only due to the nationwide pandemic. When she toured campus, she immediately understood why students feel at home.

Despite the unconventional start in Columbia, Murdock was ready to hit the ground running.

This summer, Murdock organized the Honors College One Read program and created a digital honors classroom through a messaging platform. In Murdock’s words, this “allowed students to create an Honors Community before even stepping on campus.

“I’m advising them beyond college,” Murdock says. “I want to see them succeed.”