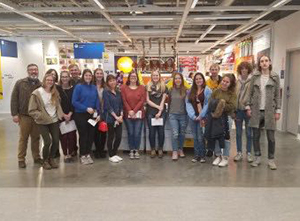 From classes to tutorials, the Honors College offers a wide range of options covering dozens of topics. This spring, a new art history course was unlike anything previously offered.

Michael Yonan, a professor of art history in the School of Visual Studies, translated his passion for Scandinavian culture into a course entitled “Scandinavian Art & Design: From Vikings to IKEA”.

Yonan’s inspiration for the course came after spending time in Scandinavia. He lived in Sweden in 2014 and, in that time, traveled extensively through Sweden and Denmark.

“I had fallen in love with Scandinavia and become very interested in its art and culture,” Yonan says. “I don’t think that this kind of material has ever been taught here before, so I thought this could be a great opportunity to teach something new at the university.”

Sophomore journalism major Elena Cruz is one of the 17 students enrolled in the class this semester. Though it was not part of her journalism coursework, Cruz wanted to take advantage of this unique course.

“Students can learn so much about a culture through its art, and I wanted to learn more about this specific section of the world,” Cruz says. “I figured I wasn’t likely to get this educational opportunity again.”

When creating this class, Yonan had two specifics in mind. First, he wanted it to be an Honors-exclusive course, due to the unique subject matter. This he achieved; there are 16 Honors students enrolled in the course from a variety of majors. Second, he knew he wanted to take the class on a field trip to IKEA, a Swedish-founded retail store that sells furniture and accessories, to show the students examples of Scandinavia art and design in real life. After all, he says, “who doesn’t like IKEA?”

Yonan’s vision became a reality on April 9 when he took his class on a trip to IKEA in St. Louis. According to Yonan, the group was given a warm welcome at the entrance and shown to a conference room where he gave a lecture to the students. From there, he sent the students off on an activity to complete in the showroom. The day concluded with the store manager giving a lecture about the history of IKEA, its business principles and its design principles, before answering questions from the students.

Cruz says the trip to IKEA was a great learning experience, and a fun field trip. She found the knowledge she acquired over the semester useful during the trip.

“I loved the trip to IKEA because I was able to analyze the store and its goods from a historically significant lens thanks to the lessons in our class,” Cruz says. “We also met with the manager of the store, and he talked a lot about its founding. It was a very fun and informative trip.”

In addition to the IKEA trip, the class visited the Special Collections exhibit of MU’s Ellis Library. Yonan and his students were shocked by the number of Vikings artifacts they found.

“I know it’s not what people think, but Missouri is a great place to study art history,” Yonan says. “There is an enormous amount of art in Missouri, as well as a ton of culture and design, much more than people realize.”

Yonan is hoping to teach the course again in the spring of 2019 and wants students to continue to learn the value of not only Scandinavian art, but art of all forms.

“I wish for students to learn a little bit about how relevant art history is to things in their contemporary lives,” Yonan says. “To get people to be interested in Scandinavia, of course, is a bonus, because it is a part of the world that I have come to love.”