UPDATE [Oct. 5, 2020]: MU Honors mourns the passing of Mr. Goode, who died of leukemia at the age of 83 on Saturday, October 3, 2020. You can read more about the life and educational legacy of Wayne Goode within the brief story in the St. Louis Post-Dispatch.

Senator Wayne Goode is a busy man. During his 42 years in the Missouri state legislature, including 21 years in the senate, he has spent his time advocating for education and environmental issues, as well as working to create a more professional process to handle money. Goode also served seven years on Mizzou’s Board of Curators, passing legislation necessary to create the University of Missouri-St. Louis. Now retired, the 1960 Mizzou graduate continues to make an impact on his home state and alma mater by serving his community in a multitude of ways. 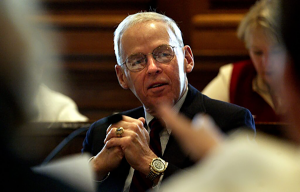 Wayne Goode, BS BA ’60, is a U.S. Army Reserve veteran who served on the Missouri House of Representatives and the Missouri State Senate.

“It ends up that I’ve been involved with the university one way or another practically all my life,” Goode says.

His most recent contribution resides in the MU Honors College, where he has funded a new scholarship: the Senator Wayne Goode Scholars Program. In its inaugural year, the scholarship offers a two-year plan for incoming freshmen to get immediately involved in research on campus. It also includes an additional $2,000 per year for selected students. Scholars spend approximately eight hours a week on their research project during the school year.

Mizzou freshman and Goode Scholar Alyson Kee was ecstatic when she got the notification email with the news of her selection.

“Not to be cheesy, but it was kind of a dream come true to me,” the engineering major says. “My goal since I’ve known I wanted to become a biomedical engineer was to be in medical research, but I never thought I’d have the opportunity as a freshman.” 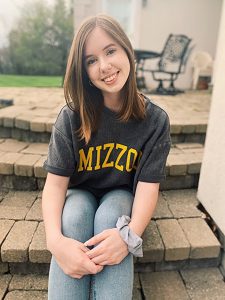 Kee is excited to get involved with all the university has to offer. She plans to join multiple service organizations on campus, as well as the Society for Women in Engineering.

“It’s already been life changing for me to have all these opportunities opening up,” Kee says. “The programs here are amazing.”

Bradford Siwak, a freshman Goode Scholar from St. Louis, intends to put his research opportunities to use in the field of journalism with his faculty mentor, Heather Lamb. Lamb is a professional-practice professor at Mizzou with 17 years of experience in the field.

“I’ve always been drawn to journalism,” Siwak says. “Of course, having one of the country’s best journalism programs in my back yard was a major factor in my decision.”

For his first semester, Siwak is currently enrolled in three journalism classes, as well as four honors courses. The Goode Scholars Program will add an additional eight hours of experience each week to his résumé as he works with Lamb on projects for Vox Magazine, a publication largely run by Mizzou students. 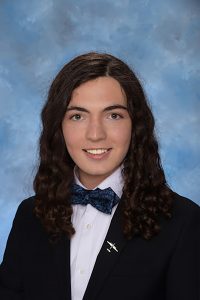 Bradford Siwak is a freshman journalism major from St. Louis.

“I am so grateful for the opportunity to be working with the editorial director of a professional magazine, out of one of the best journalism programs, immediately coming into here,” Siwak says. “It’s just an insane opportunity for a first semester freshman that I’m highly appreciative of.”

“I received a good education there, for sure,” Goode says. “And I had a very good four years socially. It was an enjoyable time in my life — the friendships I made and the people I got to know.”

As Kee and Siwak begin their journey at Mizzou, Goode is glad to do his part contributing to accessible education for Mizzou students, recognizing the need for the university to attract and retain bright students.

“I’ve always been conscious of what it costs to go to university,” Goode says. “With both my kids, I set aside money for them to be able to go to school where they wanted, and they were both able to do that. I’ve always been cognizant of that and tried to plan ahead, so all those things go into what caused me to fund a scholarship at the Honors College.”

Kee also notes that money can play a big role in what kind of education is accessible to students.

“People are in different situations in their lives, but the fact that Mizzou and people like Senator Goode are able to provide this world-class education and all these crazy opportunities to students who wouldn’t normally get them? It’s amazing,” Kee says.

The funding used for the Goode Scholars Program goes beyond financial aid to enhance the educational experience for Mizzou students through immeasurable research opportunities in their chosen fields of study.

“I’d like to say [to Mr. Goode], you’ve changed my life,” Kee says. “This is something that I will remember for years down the line. It’s been truly amazing and it’s been a dream come true for me.”