Sumpter is an economics and statistics double major. 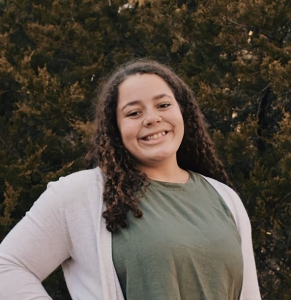 This year, Sumpter has struggled with her own identity as a student.

“When I came here, everything I thought I was had been kind of stripped away from me. In high school, I felt I had a very defined identity. When I came to Mizzou my environment was completely different. I almost needed to find myself again,” Sumpter says. “I found out a lot about myself this year.”

“I’m a friend, I’m a daughter, I’m a sister,” Sumpter says. “Those things are really focused on as a part of my identity, because I did struggle with that when I came here.”

Sumpter is also an avid sports fan. In the future, her ambitions lie in sports analytics.

“Being from Kansas City, it’s not hard to be a sports fan — I’m always at Chiefs games,” Sumpter says. “I plan to add math to my majors. The trifecta [math, statistics and economics] is really beneficial, and it shows I can think about things more than if I just did statistics. My ultimate goal is to work for a Major League Baseball team.”

“Seeing a lot of women gaining ground in sports has been really cool for me,” Sumpter says. “I want to act as one of those role models, and hopefully inspire young girls aspiring to work in sports but don’t think they can be qualified because they’re a woman.”

As a member of the Honors College and a Discovery Fellow, Sumpter must dedicate eight hours of work a week in research related to her major. As a result, the Honors College has become a strong connecting thread in her year of education at Mizzou.

“[The Honors College] means so much to me,” Sumpter says. “It has provided me with so many relationships that I wouldn’t have been able to have otherwise, both with mentors and peers. It’s nice to have peers who share your values and mindset.”

The Outstanding Discovery Fellows award means a lot to Sumpter.

“I put a lot of work into [Discovery Fellows,]” Sumpter says. “It definitely means a lot knowing that my mentor nominated me for this award. Knowing she thinks I worked hard and did a good job throughout the year means more than anything else.”

Despite working hard, Sumpter still struggles with some things as a student. She describes herself as a perfectionist.

“I’m working on giving myself more grace,” Sumpter says. “Throughout high school I was always straight-A’s, but coming to college things are a lot different, and everything’s new.

“Just because something’s not perfect, doesn’t mean it’s not good.”