This February, Mizzou celebrates Black History Month through a series of plays, lectures and other events. Titled “Black Families: Representation, Identity, Inclusion, Diversity, and Histories,” the university-wide program also features Honors College opportunities for its students to learn and engage with Black history.

Maya Gibson, humanities and music professor in the Black Studies Department, teaches “Black Women in Music — From Billie Holiday to Beyoncé,” which offers more than a history lesson. The course also provides a forum for students to go beyond learning to discuss the topics addressed in class. 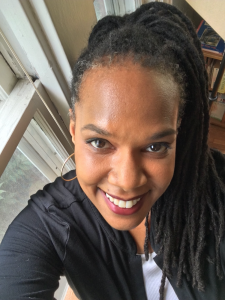 Maya Gibson has taught at Mizzou since 2011.

“The course highlights the role of Black women as producers and consumers of classical, jazz, and popular music during the 20th and 21st centuries,” Gibson says.

Freshman political science major Matthew Pecoraro (O’Fallon, Missouri) believes every student should take a class that focuses on Black history. Pecoraro says Gibson inspires engaging conversations while encouraging students to go above and beyond to learn.

“My classmates are all so amazing,” Pecoraro says. “We have a pretty small class, so we feel comfortable around each other sharing our ideas. I truly learn something new every class.”

Junior journalism major Janae McKenzie (Columbus, Ohio) took the class in Fall 2020. She says she doesn’t know anyone who could teach the class like Gibson.

“Most honors classes are smaller by design, and Dr. Gibson used this to create a group that was a bit like a family,” McKenzie says. “Especially during a largely remote semester, having that group to talk, learn and laugh with every other day was super important.”

Gibson says she began teaching the course out of a desire to teach the class she wanted to take as an undergraduate.

“It challenges assumptions we might carry about Black women in music,” Gibson says. “It deepens a knowledge base about music that is often familiar (and some that is less familiar) but goes uncontextualized, and it does so in a fun and compelling way.”

Sophomore film studies major Bailey Sims (Kansas City, Missouri) says she loves being able to “hear history” and connect things from the music to the articles and discussions covered in class.

“Being a Black woman, Black history is a part of my everyday life,” says Sims. “With this course, I learn about the powerful Black women that have led the way and have shaped music into what it is today — every single genre.”

McKenzie also notes that as a Black woman, history is a crucial part of understanding your place in the world, as well as how you can make it better.

“Toward the end of the class, we did a deep dive into Beyoncé’s ‘Lemonade.’ After 10 weeks of understanding Black women in disco, rock, country and blues, to name a few, I could hear all of their voices behind Beyoncé,” McKenzie says. “Their voices have been the undercurrent for so many of our favorite songs. One of our lessons described a Black woman singing as the voice of America, and that really stuck with me.”

“Our discussions in class are so rich and insightful,” Gluesenkamp says. “We have a variety of people in class including musicians, journalism students, future scientists and more. The many perspectives people bring to our discussions are just fantastic. I learn as much from my peers as I do from Dr. Gibson.”

“Imagine how dull the world would be without the contributions of Black people, and then celebrate the culture by learning more about it,” Gibson says. “Opportunities abound to enrich our knowledge and deepen our understanding. If I could teach Mizzou students one thing, it would be that Black History is more than a month. Black history is American history.”