By day, senior Tyler Emery is a typical college student; she attends class, participates in extracurricular activities and spends time with her friends. By night, she is a professional news anchor for Columbia’s NBC affiliate, KOMU.

On weekday evenings, Emery’s face appears on television sets across mid-Missouri as she broadcasts the news live to 40,000 viewers in 15 counties. 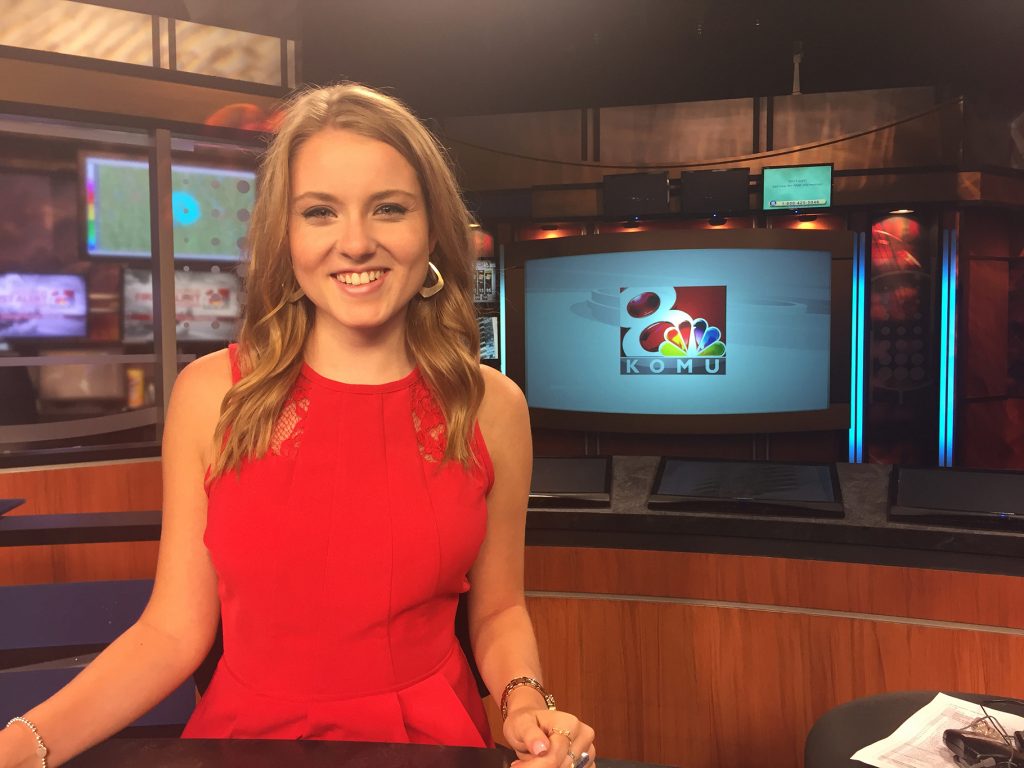 Her dream to be a television broadcaster was born in middle school when her teacher picked her at random to read her school’s first video announcements. From there, she joined her high school’s broadcast program, and in 2014, she left her hometown of Northbrook, Illinois, to begin her journalism education at MU.

Emery, an honors student at MU, has embraced the School of Journalism’s world renowned Missouri Method of learning by doing. Through course work, extracurricular experiences and her job at KOMU, Emery has honed her skills and clocked hours upon hours reporting, producing, scripting and anchoring.

KOMU is a university-owned television station that employs both students working toward careers in broadcast journalism and experienced professionals. Students take on many of the smaller anchoring and reporting duties, but the evening news anchor roles are traditionally reserved for seasoned professionals. That changed this fall when Emery’s skill set, talent and years of hard work landed her the job as an undergraduate.

“The opportunity just kind of came along,” Emery says. “Our evening female professional anchor left in August, and the station asked me to fill in until they hired a new anchor. Getting this professional experience before I’ve even graduated is an opportunity I’m so thankful and honored to have. Not many students in the country can say they’ve already gotten a chance to anchor in a professional setting.”

While the new role is a welcome and exciting step for Emery, it also means she must balance life as both a working professional and a college student. After a morning of classes on campus, she races to the station to prepare for the evening newscast.

“I get to work around 2:45 p.m. and start by doing my makeup for the cameras,” Emery says. “Then I turn on my curling iron and sit down to read the news of the day so that I know the names and the facts. After that, I start reading my scripts for the 5 p.m. show and go story by story looking for things like spelling errors, grammatical errors and other things that could mess me up on air.”

After the preparation process, she transitions to the studio desk for microphone and camera checks before the show begins. On Monday evenings, Emery goes through this process four times, as she anchors the 5, 6, 9, and 10 p.m. shows. Tuesday through Thursday she anchors the 5 and 6 p.m. newscasts.

Emery does not mind the crazy schedule; in fact, she is used to it. Between leading service trips for Mizzou Alternative Breaks, being a member of Chi Omega and Omricon Delta Kappa, holding an executive position for the organization Rockin’ Against Multiple Sclerosis (RAMS) and representing the Honors College as a student ambassador, she has become an expert at time management and organization.

Beyond her extracurricular activities, Emery works as a producer and anchor at Newsy, an online video news network based in Columbia that produces short-form digital pieces about events around the world.

“Working at Newsy has helped my anchoring skills progress because they have a very conversational and informal style,” Emery says. “That has set me up really well to do the evening anchoring position at this point in college. I don’t sound like a robotic news anchor; I try to sound much more conversational, like I’m telling the viewers a story rather than reading the news at you.”

The extra experience also helps Emery prepare for the challenges that come her way in the fast-paced broadcast world.

“There are constantly so many things that can happen, go wrong or change, and you have to be on your toes and ready for anything at any point in the newscast,” Emery says.

Despite the occasional microphone mishap, live feed crash or accidental camera change, Emery enjoys working both in front of and behind the camera.

“The most rewarding part of it is getting to work with the people,” Emery says. “I love being able to interact with our weathercasters, our producers, our directors and everyone else. It’s a very centralized role because at the end of the day I’m the one putting out the final product to the viewers that everyone worked so hard on all day.”

Emery sometimes forgets just how many people across mid-Missouri actually see that final product. She is always taken aback when viewers recognize her.

“I still think of myself as a student in this campus bubble and not a working professional that people will recognize by face,” Emery says. “When I anchor, I’m sitting in a studio with maybe three others in the room and I forget that there’s an audience of thousands of people who actually see my face every day, so getting stopped in the grocery store is very surreal for me.”

Those types of occasions will increase if she achieves her goal of anchoring on national news.

“That would be the dream,” she says of becoming a national anchor. “But it’s a long road to get there. I see that and I have that goal, but I want to look right now at what my next step is so that I can one day get there.”

That next step is finding a dual anchoring and producing job at a local level news station after graduating in May.

Emery’s college career has been shaped by her mission to pursue her dreams and achieve her goals. She has some words of advice to offer anyone trying to reach their goals; advice she wishes she could go back in time and give to her younger self when she was just starting out.

“My advice would be to remember to take just a little time every day to do things that you enjoy, spend time with people you enjoy and relax a little,” Emery says. “I think it is so important to work really hard in college and take advantage of every opportunity that comes your way, every door that opens when trying to achieve your goals, but if you don’t have a clear, clean mind, it will hold you back from being able to achieve your full potential and dream career.”