The Mizzou Honors College offers a new, international look at schools around the globe. Taught by Stephen Whitney, associate professor of educational psychology, and Gabrielle Malfatti, ancillary associate teaching professor and director of global engagement for the MU College of Education, “Education Across the World” encompasses analysis, critique and discussion of education through an international lens. Topics include Singapore’s strict regimen, Finland’s easygoing success and a variety of other themes in the education world. 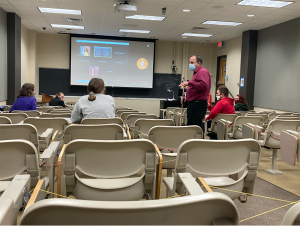 Students participate in class discussion in a socially distant way: a microphone precariously taped to a six-foot broomstick.

International guests speak to students about their experiences in the education system in their home country. During the Fall 2020 semester, guests joined via Zoom. Malfatti hopes to update the Spring 2020 course to a “version 2.0.”

“One thing we have learned through remote interactions is that the students are left craving more on both sides,” Malfatti says. “We are hoping for future offerings of the class, and we would like to have a continuous partner with a mirror class in another country — or even two other countries.”

The atmosphere of the class is light-hearted, open and collaborative, with students constantly chiming in during discussion time to enhance understanding of various topics.

Even aspiring presidents gain from what the class has to offer.

“I’m not an education major, so taking this class has really opened my eyes to the American system and the things we do in this country that may be different from other countries, what works here and what doesn’t work here,” says Megan Steinheimer, a junior history major. “I’m taking notes, and I’m like, OK, this is what I should tell my secretary of education.’”

Students hail from a variety of backgrounds and majors, including journalism, history and education.

“I just hope [the class] makes people see how important education is,” says Taylor Kroupa, a junior elementary education major. “This [class] shows you how we can make change, not only as educators but also as people who are going to have kids.”

Malfatti and Whitney launched the class to fulfil what they saw as a need for a perspective on a world educational view — and to put an American education in an international context.

Whitney had entertained the idea of the class for a while, but with the recent Zoom boom, international connections became a reality.

“We don’t need to have an expensive flight,” Whitney says. “We can do this virtually and have interactions without ever leaving Columbia.”

Whitney hopes to enlighten the Mizzou community with the class.