From afar, MU Honors College freshmen Rachel Henderson and Paige Williams seem like polar opposites. Henderson, from Roswell, Georgia, is a journalism major and Walter Williams Scholar who hopes to pursue a career in broadcasting. 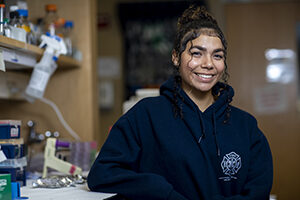 Williams, from Blue Springs, Missouri, is a biology pre-med major who wants to help others in emergency medicine or anesthesiology.

What Henderson and Williams share is that they are the class of 2023 recipients of the Brazeal Scholarship, which supports honors students who are typically underrepresented in higher education, particularly African-American students.

The program includes an academic scholarship, a study abroad fund and the opportunity to participate in a research or artistry program.

This is the first time that two Brazeal Scholars have been selected in the same year.

“Every student deserves to have such a great blessing like this,” Henderson said. “The fact that they wanted to share the opportunities that they had with multiple people that aren’t in the same major either, is really good.”

For Henderson, a strong journalism program was always in her sights.

“Mizzou was always at the top of my list,” said Henderson, who appeared on the U.S. News & World Report website. “MU provided great financial opportunities, so at the end of the day it came down to that and the quality of the [journalism] program”

Williams considered a small pool of schools and credited her experience touring Mizzou’s campus and opportunities like the Brazeal Scholars Program for helping her choose Mizzou.

“The Brazeal Scholars Program set me up for my future because medical school is really expensive,” Williams said. “If I don’t get into as much debt now, then I have more money for later.” 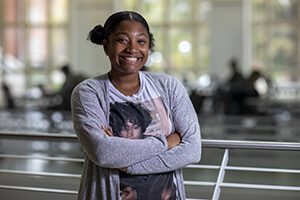 In their short time on campus, Henderson and Williams have already begun making an impact. Henderson is working on an ASH Scholars research project titled “Minority-Focused News as a Locus of Empowerment.” She also reports for MUTV and joined the National Association of Black Journalists. Williams is completing a research project in immunology.

Throughout their honors experience, both students said they have had valuable opportunities to interact with older Brazeal Scholars and affiliated faculty members.

“The first time I met Paige and the other upperclassmen Brazeal Scholars, it was cool because it was a little cohort for all of us to support each other and grow, along with Dr. Bowers and Mrs. Drayton,” Henderson said. “It’s also a good community for you to turn to if you need anything. We’re all bonded by the scholarship.”