It has now been a full six months since I 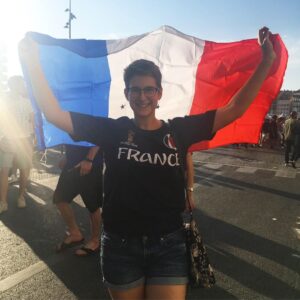 departed from Marseille, France, and brought to an end one of the most memorable experiences of my life. I learned more about my future career, lived by myself in an apartment for the first time, nearly missed my flight back home, and made some amazing memories along the way. I have struggled for months to find the words to accurately describe my experience in France. On this ‘anniversary’ of sorts, I would like to describe my voyage and what it has brought me, as well as reflect on how my experience has affected my life back at home over the past six months. I now feel more aware of what I would like to do in the future, my relationship with the world and its history, and how to connect this new background I have with everything my future holds. This study abroad has been an amazing reminder of the opportunities allowed me by the Stamps Foundation and the enrichment fund. My hope is that this trip gives me a basis to leap from in the future, as I continue to learn, grow, and investigate the change I can make in the world, and that the world can make in me. 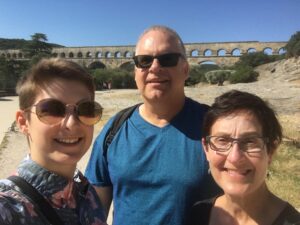 Before starting my formal study abroad, I got to experience France through independent travel with my parents. We had the wonderful opportunity to travel all over France while improving my language skills, learning more about the country I would be inhabiting, and viewing some of the most spectacular historical monuments and artifacts I have ever seen. As my parents had never been to France, and I had been only once before, we decided to put my French language and navigation skills to use and go on a grand tour of some of the most magnificent, ancient, and interesting sites in the country.

We began in Paris (where else!), 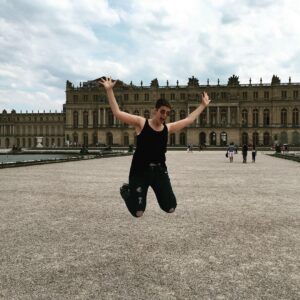 taking in the grandeur of the Palace of Versailles before driving to the site of the Allied landings on the D-Day beaches in Normandy, where we stayed in a charming bed and breakfast. We traveled on to Mont-Saint-Michel, a wonderfully picturesque abbey on an island that seems right out of a fairy tale. Driving south to the Loire Valley region, we toured a wine cave, saw how they grow mushrooms underground, and stayed in a troglodyte Airbnb: a home carved into the rock of a cliff! We also traveled to the Château de Chambord, a French castle constructed for King Francis III. We then took the train south towards the Mediterranean coast, stopping along the way for a night in Carcassonne, a medieval walled city that seems to transport you to the time of knights and princesses. We also made time for a stop at the beach, our first time on the Mediterranean sea, and visited the ancient Roman aqueduct at Pont-du-Gard and the Roman ruins at Arles. It is amazing how much history is alive in one country. 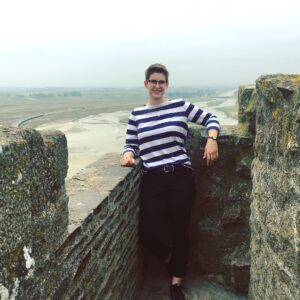 In the span of two weeks, we saw engineering and artistic marvels from all centuries, from Roman times, through the middle ages and the French Revolution and beyond! As much as I love the natural beauty of the American landscape and vibrancy of our cities, nothing compares to the sheer cultural history surrounding every place you go to in a country like France. We ended by traveling back to Paris, for more time in the City of Lights. We visited Monet’s gardens in Giverny, browsed through several of the greatest art museums on earth, and climbed almost 300 stairs at the Arc de Triomphe. Then, France had one last surprise in store for us! During our travels, France had been playing in the World Cup in Russia. On July 10, my last night before joining my study abroad program, we watched the semi-finals on TV. The French national team defeated Belgium 1-0, meaning they were going to the World Cup final! Our hotel was near Place de la République, and the festivities there continued throughout the night.

The next day, I said goodbye to my parents and met the group with which I would be spending the next 5 weeks. The program I was with, Summer Internships in Marseille, France, was through the Trulaske College of Business. Luckily for me, a business background was not a requirement! Command of the French language wasn’t a requirement either, but I was able to get credit towards my French minor for my class and internship. After a few more days getting to know one another and exploring Paris, we traveled to Marseille by train, 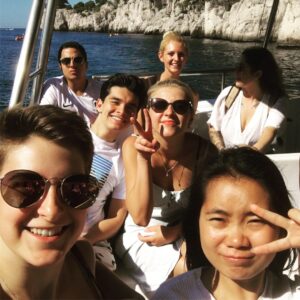 arriving just in time to find our new apartments and attend festivities for Bastille Day, one of the major holidays in France. Because one celebration wasn’t enough, the next day France won the World Cup, beating Croatia 4-2! A group of new friends and I watched the extremely exciting game from an outdoor restaurant, and after the clock ran out, the city went wild! The rest of the day was filled with celebrations, as everyone, regardless of true nationality, reveled in this once-in-a-lifetime experience. 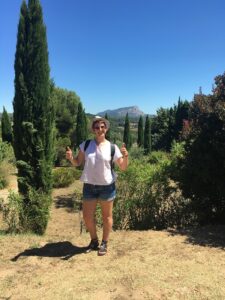 My program truly began the following week, with the commencement of our class, the Studio of the South, which we would attend one day a week to explore the art of three renowned artists: Cézanne, Gauguin, and Van Gogh. These artists all worked in the south of France, in some of the very locales we got the chance to visit. We delved into the history of these artists, and why they chose southern France as their inspiration and canvas. I learned a great deal, not only about them, but also about the environment in which they lived, and how aspects of their lives and of their art relate to issues today.

The other four days of the week were spent at individualized internships; mine was at an engineering consulting company called Bourbon Offshore that works with subsea equipment and infrastructure for energy companies. This was a wonderful experience, not only to rapidly improve my French and to have the chance to do valuable, hands-on work as an intern in my field of study, but also to experience workplace norms and daily life in another culture; something that is not possible when just visiting. For example, as an intern in the United States, you would almost never have the chance to go swimming in the sea over your two-hour lunch break, or feel compelled to “faire la bise” (make French cheek kisses) with every person in the office, every day. The French have a different outlook when it comes to time and productivity as well, and I believe it was very valuable for me to experience a different culture, and perhaps bring certain aspects of it back home – except maybe for the enormously awkward la bise.

Luckily, the final five weeks of my time in 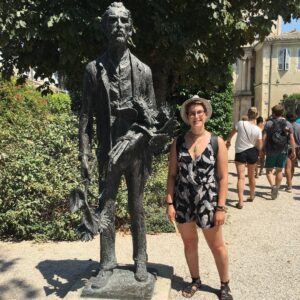 France weren’t all spent in the office. As a group, we went on many cultural excursions to such places as the charming beachside town of Cassis, but also to places whose history we had learned about in our classwork, such as Saint-Rémy, the asylum where Van Gogh stayed after attempting to cut off his ear. I also had the chance to try out solo travel for a weekend, something I’ve wanted to experience for a while. I loved the feeling of freedom it gives to answer to the needs and wants of no one but yourself. I kayaked through beautiful rock formations called the Calanques, ate crêpes and sunbathed by the beach, and had a wonderfully picturesque hike. Although my weekend adventure had its share of anxiety (try frantically face-timing your parents at 8 am when you can’t get cash out of the ATM!), I can’t wait to head out on my own again. 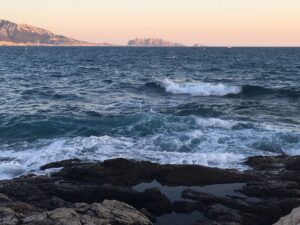 By living in an apartment in Marseille, I was more on my own than I had ever been. Previously, I had lived at home or with a roommate in the dorm. It is quite the experience, learning to care for yourself, on your own, while living in the city for the first time, all on the other side of the globe! But I loved every bit of the freedom these changes provided. Of course, I missed things about home: family, friends, and Taco Bell, to name a few, but thanks to modern communication, I was in contact with the people I care about. Now that I am back in the U.S., I have had time to truly compare the differences between the two countries and cultures in which I have lived. I find myself missing certain things about France more than others, and appreciating different things about my home. For instance, my experience living in a city and country with ample public transportation has led me to realize that this is one aspect in which the U.S. is sorely lacking. However, I was anxious to get back to a country that actually has public restrooms!

Despite the stress of flying 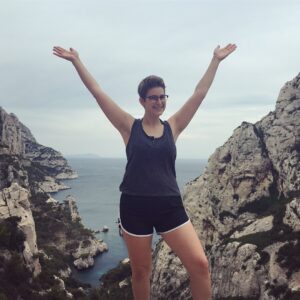 and the awkward moments that occur when navigating a different culture in a second language, my time this summer has confirmed for me that everyone, regardless of major, background, or language ability, can benefit from spending time in a foreign country. I was extremely lucky to have support along the way from the Stamps Foundation, and I can definitely say that the enrichment fund has lived up to its name! Thanks to the financial assistance from the fund, I was able to have a wonderfully enlightening trip without having to worry about the cost of lodging and tuition. Because of this opportunity, I was able to focus on learning about myself, further refining my goals, and nurturing the traveler and independent woman that is so much a part of my identity. I am now more confident speaking French, and hope to continue my use of French in a professional environment in the future. I cannot wait to apply what I have learned abroad to the life I live here in Missouri, but most of all, I can’t wait to see where else I will explore in the future!