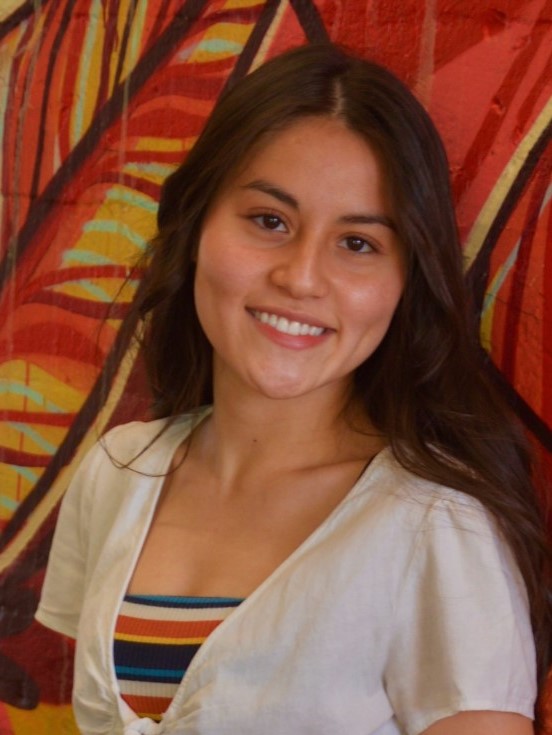 “I originally applied to Brooks. Someone reached out to me and sent me an email about Blatchford,” Dykstra says. “I’m glad I kind of stumbled into that. I never thought I would be here doing this.”

Dykstra, who originally comes from Oklahoma, is a member of the Potawatomi nation. At first, she was nervous about going to a school in another state, but was happy to find that there were other students that wanted to succeed the way she does.

“I’m glad I’m in Honors,” Dykstra says, “I feel like a lot of people in the Honors College have the same mindset and goals. Everyone…cares about college.”

Dykstra, as a freshman, has a lot of opportunities to take advantage of around campus. She is passionate about sharing and celebrating her culture.

“I want to grow in being more involved,” Dykstra says. “I want to introduce powwows, and little things that we do, and bring out what we do to people a lot more.”

So far, Dykstra is involved in Four Directions, which is the Indigenous students’ organization on campus, and Japanese club. In the future, she also hopes be involved in a class on genocide, having heard stories from her grandmother about what she went through as a child. Her course of study, too, has given her a chance to be more involved with her interests.

“I actually started out as an international business [major],” Dykstra says. “I switched over to journalism because I like having conversations and I like learning. I have a big range of interests…so I like how there’s a range of things you can cover.”

Besides her new major, Dykstra is jumping into her new life — and self — at college.

“Since I’ve come here, I feel like I have to put myself out here to make friends. I have to reinvent myself. I get to decide who i am i get to put a label on me,” Dykstra says. “’Define or be defined.’”

“[My family] is my little fan club,” Dykstra says. “I do miss my family a lot, I’m pretty close to them.”

Dykstra has always looked up to her mother and father. Her father inspires her to put her happiness first. He has always stressed the importance of being proud of her culture and where she comes from. Dykstra’s mother, who is Japanese, dreamed of going to America for school — and she did exactly that. Dykstra admires how she “went after her dreams.”

Besides her parents, Dykstra is also working hard to make those who came before her proud.

“I’m taking my opportunity and running with it,” Dykstra says. “I always think back on what past generations have done for me. I’m doing it for them.”