Luke Lindberg has ended his freshman year at the Honors College with a bang.

Lindberg, a physics and mathematics major, has been awarded the W. Alton Jones scholarship, a scholarship awarding excellence in underclassmen at the College of Arts & Sciences. 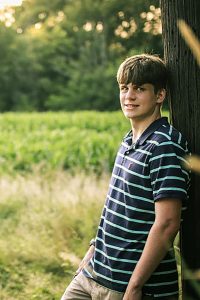 “I took physics my junior year of high school, and I really liked it because it didn’t require a lot of memorizing,” Lindberg says. “It was mainly problem solving, and everything you’re doing represents something in the real world.”

Lindberg, from Springfield, Illinois, is the eldest of five siblings. Two of his siblings are adopted from China. In middle school, his younger sister had medical issues that led to a hospital stay in Cincinnati that lasted nine months.

“It was a long time ago, but it was a rough time,” Lindberg says.

Lindberg has enjoyed the academic rigor of his Honors College classes.

“Last semester, I took honors physics in-person while the regular physics class was online, and I got a lot out of it,” Lindberg says. “[The Honors College] lets me get more in-depth.”

Lindberg takes a lot of pride in his development as a student and scientist. In one of his public speaking classes, he often covers topics in physics he finds interesting.

“When I finish giving a presentation to the class, I feel really proud of myself,” Lindberg says. “I’m more of an introverted person, so when I am able to give a presentation in the field I’m passionate about and I do it well, I’ve felt really proud about that.”

With the W. Alton Jones award, Lindberg hopes to build on his education.

“I want to make my education as meaningful as I can,” Lindberg says. “Everybody’s good at something, and I feel that’s physics and math for me. I like to challenge myself. I eventually want to become a researcher at a university.”