Hello, everyone! My name is Aravind Kalathil and I’m a freshman at Mizzou. I come from around St. Louis and I plan on majoring in Psychology. Coming to Mizzou has been more than I ever thought it would be. Coming here has been a massive shift from high school and I’ve loved every second of it. I wanted to come here because I thought Mizzou was a perfect mix of academics, athletics, community, & school spirit and I have not been proven wrong yet. In my first 3 months here, I’ve found a great group of friends , a school that makes me truly think, and a place I’ve come to love. The classes are much harder than high school, but that is to be expected. I’ve become great friends with the rest of the Stamps Scholars and I am very excited to see all the things I will do at Mizzou. 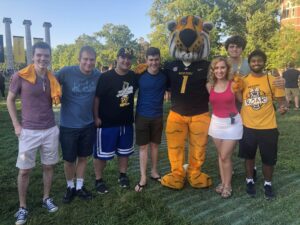 Me and my friends after the Tiger Walk earlier this year.

More recently though, all of us freshmen Stamps Scholars went to Alabama with the Brazeal Scholars to learn about the history of race in America, especially African Americans. We spent the first day going through the Selma and Lowndes Interpretive Centers where we got to learn a lot about the Selma to Montgomery Protest March in order to bring attention to segregationist policies that were stopping them from exercising their right to vote as Americans. We saw many parts of this march, such as the Edmund Pettus Bridge  where it all started, to Brown Chapel Church where MLK gave speeches about the protests, all the way to the Alabama State Capitol where the marches ended. 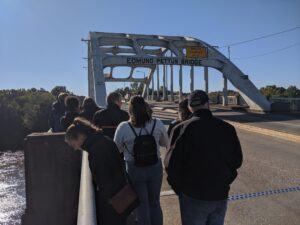 Crossing the Edmund Pettus bridge from the beginning of the Selma to Montgomery Marches.

Even though these marches lead to voting rights bills being passed, there are still plenty of ways that African-Americans are discriminated against even today. On the second day of our trip, we visited the Legacy Museum which details how racial subordination of black people in slavery and segregation in the past has morphed into the mass incarceration rates of black people seen in America today. We then visited the National Memorial for Peace and Justice which is a memorial dedicated to remembering the lynchings of African-Americans that have been mostly forgotten  to time until now. 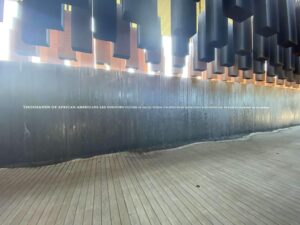 “Thousands of African Americans are unknown victims of racial terror lynchings whose names cannot be documented, many whose names will never be known. They are all honored here”

Before the trip, we read the book “Just Mercy” by Bryan Stevenson. Bryan Stevenson is a lawyer who co-founded the Equal Justice Initiative which works to get wrongly convicted people off death row and is actually opened the Museum and Memorial. Throughout the book, Stevenson talks about his work and encourages us to learn about the mistakes of our past and get uncomfortable in order to truly learn from them. Throughout my time on this trip, I feel like I’ve so much about the faults we have committed in our past and learned about ways we can try to remedy them. You can’t change the past, but you can always do better next time. Hopefully, in my time at Mizzou, I can become a better person myself and work to fix the problems that face our world. As Stevenson says in his final words of the Just Mercy, “The work continues”.