While Spring Break means a trip to the beach for many students, for some it means an opportunity to dedicate themselves to service. Several honors students joined other MU students during the recent Spring Break in a week of service through Mizzou Alternative Breaks (MAB), a student-run organization that plans service trips for students to participate in over Thanksgiving, Winter, Spring and Summer Breaks.

Bailey Simms
Junior Bailey Sims is no stranger to service. Having previously participated in three MAB trips, she took on the role of site leader for a trip this Spring Break. Sims and her co-leader led a group of eight students on an environment-focused trip to Verona, Virginia, volunteering with Project GROWS, a non-profit farm and community garden. Sims’ group spent the week working in the Project GROWS garden, as well as visiting Verona’s local homeless shelter and food bank. Sims says that the MAB principle of “Serve, Don’t Help” was an important guiding force of the trip. 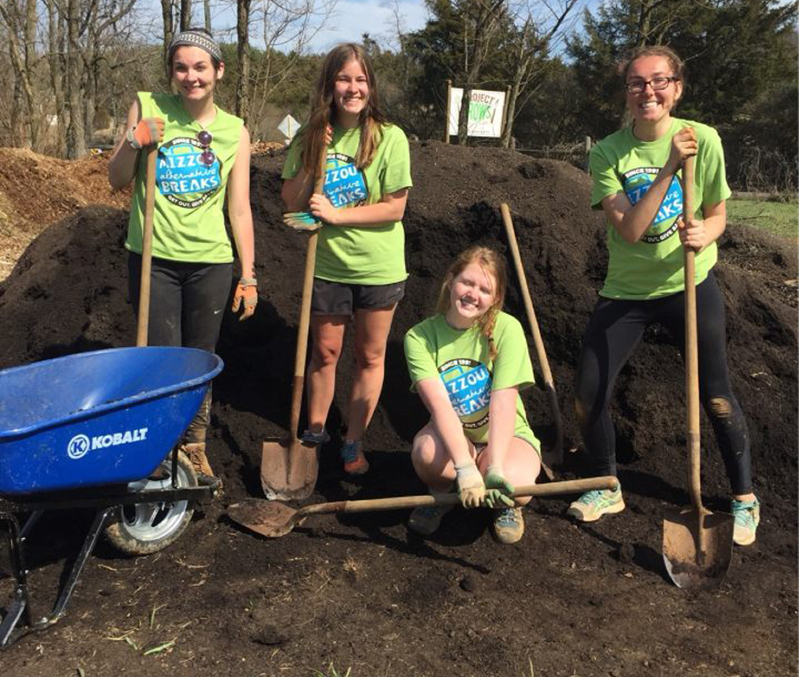 “The people we were serving at Project GROWS didn’t need our service, they could do what they’re doing without us,” Sims says. “I like to think of service as a two-way street because you’re serving them but they’re also serving you. I learned so much from Project GROWS, things that I’m going to implement in my life.”

Sims and her co-leader were responsible for planning the entire trip, including the service work, housing and transportation. The additional leadership role was a bit nerve-wracking for Sims, but she wanted to take on the challenge and further immerse herself in the MAB experience.

“I definitely feel more confident in my leadership skills after this week,” Sims says. “I think it was easier to lead an MAB trip because it’s something that I am passionate about and something that I enjoy. When you’re with your peers in an environment that you enjoy, it feels more natural to be a leader.”

The honors courses that Sims has taken throughout her college years have showed her the importance of citizenship and giving back.

“I think that honors students should be leaders on campus and embrace that role, and my honors classes have taught me a lot about what it means to be an active citizen,” she says. “The Honors College was the foundation of my desire to be a more active citizen, and then MAB was how I achieved that.”

Rebecca Craigg
All it took was one weekend for junior Rebecca Craigg to fall in love with MAB. After participating in a weekend trip last year, Craigg went on her second MAB trip this Spring Break, volunteering at Lifescape, an organization that serves children and adults with disabilities in Sioux Falls, South Dakota. 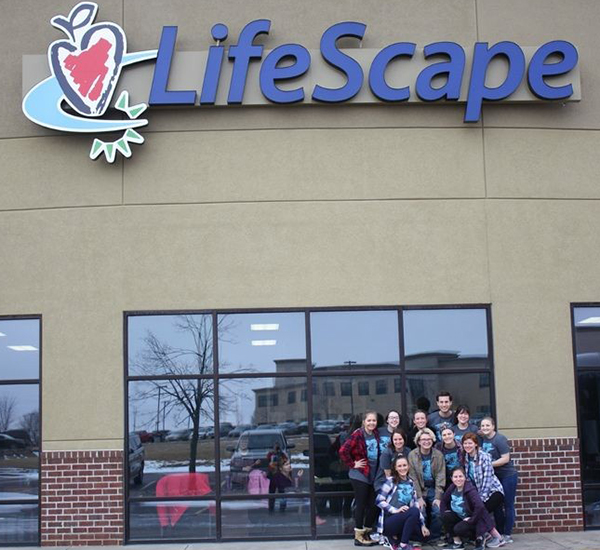 Craigg and her 10 fellow participants spent the week helping with a variety of activities at Lifescape, ranging from assisting with the childrens’ swim lessons to throwing an Easter party for the adult patients.

“Working with people with disabilities is important to me because I feel like they get overlooked sometimes, especially the adults,” Craigg says. “Going on service trips like this one really makes me happy.”

After spending the day working at their service site, Craigg’s group spent time each night conducting group reflections, which are a staple for MAB trips. Between the service, the reflection time and the down time in-between, Craigg says the week is an opportunity to learn a lot about yourself, your peers and the community being served.

“MAB is a just great organization to be involved with,” Craigg says. “I really like their underlying principles. The experience teaches you a lot about different communities and different groups of people.”

Though she is graduating next year, Craigg intends to find ways to serve after graduation.

“I feel like a lot of people have invested in me to help me become the person I am, so I want to invest in other people and give something back,” Craigg says. “That’s why I value service so much.”

Holly Enowski
Though she is only a sophomore, Holly Enowski jumped on the opportunity to lead a group of her peers on an MAB trip over Spring Break. After participating in an MAB trip as a freshman, she was chosen to be a site leader for a homeless/poverty-focused trip to Houston. 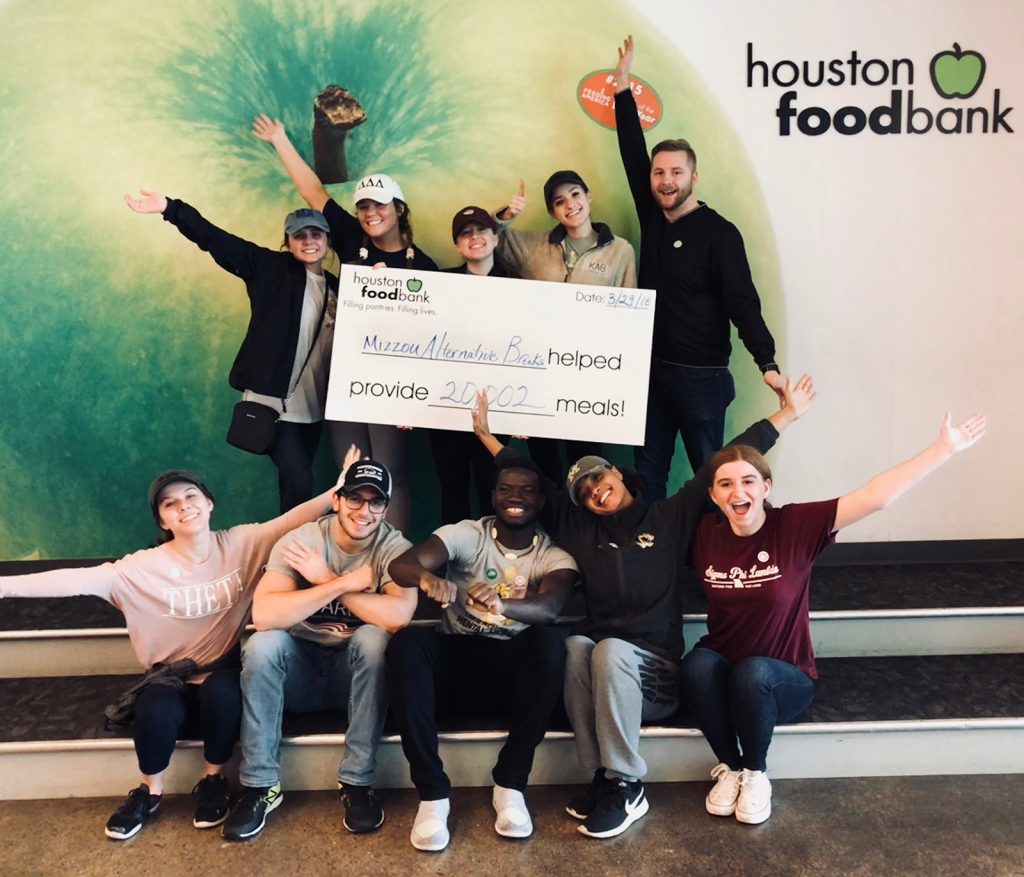 While in Houston, Enowski and her group volunteered at the Houston Food Bank, as well as helping out with the Teacher Aid Program and the Emergency Aid Coalition. According to Enowski, the variety of service that her group was able to do during the week made the trip special.

“What I loved most about our trip was that we had such different experiences each day,” Enowski says. “We were a homelessness/poverty trip, but our main focus was food insecurity. We were able to help out many different programs and directly see who we were benefitting.”

Enowski has always been passionate about service, which is why she enjoys the alternative Spring Break trips.

“Service can be fun, and MAB makes it fun,” she says. “That’s what I loved most about our trip. I never once felt like it was a chore or that I was giving up my Spring Break.”

Enowski admits to being a bit nervous to lead a trip, especially with the majority of her participants being older than her, but her experience in Honors discussion courses helped her prepare for the leadership role.

“My Honors classes have taught me to be a more critical thinker and to be able to share and defend my opinions,” Enowski says. “It’s made me more confident, which I saw while leading the trip.”

While meeting new people can be one of the best parts of going on an MAB trip, Enowski recognizes that it can also be intimidating. She says that once the awkwardness of the initial meeting is over, great friendships form within the group.

“It can be scary to go on a trip with people you don’t know, but you’ll be surprised at how many similarities you have with other students,” Enowski says. “I’ve met people that I never would’ve met without MAB.”