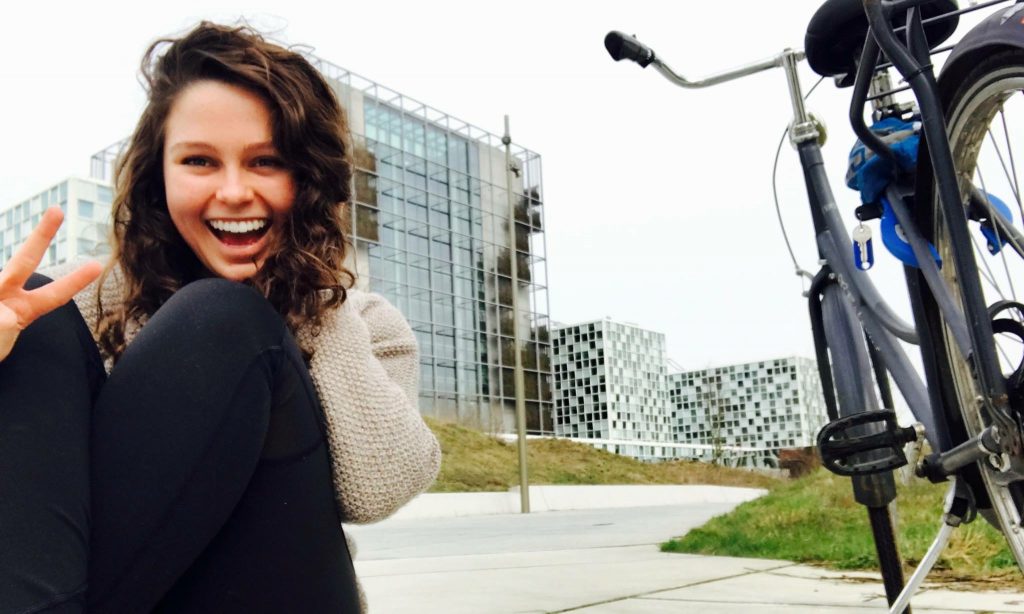 Kate Hargis has caught the travel bug. The senior political science major has studied abroad in Ireland and Oman, and is currently finishing up her final semester of college at The Hague University of Applied Sciences in The Hague, Netherlands, through a direct-exchange program operated by the Honors College and International Programs at MU.

Hargis came to MU her freshman year as a math major, but her summer experience studying Arabic in Oman sparked her interest in international law and justice.

“I hate seeing Islam, the Middle East and violence used so interchangeably,” Hargis says. “I became really interested in seeing what I could do to assist in bringing peace and stability to the region. Then, as if by fate, I decided to enroll in Dr. Bowers’ genocide studies course in the spring of my junior year, and I discovered how international law and human rights studies could tie all of my passions together.”

Honors College Director J.D. Bowers’ genocide course allows students to explore issues of injustice and conflict around the world. The class covers United Nations laws, international crime and prosecution, post-conflict justice and other human rights issues, including events like the Holocaust and the Syrian Civil War.

“If it weren’t for the genocide studies class, I would not be in The Hague right now,” Hargis says. “It showed me this whole new area of study that I’d never seen before. I now have this desire to learn as much as I can about international justice so that I can study international law.”

Hargis’ classes at THU build off her previous political science and honors coursework at MU. So far, she has taken courses such as public international law and global development issues and she is currently enrolled in a simulation course called EU decision-making, where she gets to work with her classmates to recreate the European Parliament.

“It’s a fascinating course because although I’ve studied European politics at a glance back in the States, here I’m literally immersed in it, which is really fascinating,” Hargis says.

In between her busy class schedule, Hargis makes time to explore The Hague and visit all of the places she has read about in her studies, including the International Criminal Court.

Hargis shares the following report from the field to provide a glimpse into what life is like in The Hague.

My bike (a necessity in The Netherlands and easily rented for the semester from a THU student organization called B-Cycle-It) has now successfully guided me to each of those, and while riding around the city I am constantly reminded of how remarkable The Hague is in terms of progress in the international arena.

My first day was anything but uneventful. When I first stepped off the train from Schiphol (Amsterdam Airport) at Den Haag Holland Spoor, I was a bit nervous, very jetlagged, and extremely confused. It literally took me fifteen minutes just to figure out how to exit the train station!

But there I was, in Europe, in the Dutch political capital, greeted by cobblestone streets, tram tracks, and, unfortunately, a broken suitcase that would not easily travel that same streets and tram tracks.

Apparently, I looked both very non-Dutch and very confused because a tall man with a giant smile walked toward me and shouted “Where are you going?” in English, and he happily pointed me in the right direction, a mere block away. But still, the suitcase. After going a mere 100 feet, and struggling the entire way, a woman pulled over in her car and offered to drive my luggage to The Student Hotel. I had been in the country just over one hour and already had two people go out of their way to help me. The hospitality of the Dutch remains one of the lasting high-points of my time here.

By the end of the first week, despite the adjustments required, I began to feel right at home.

THU is such an amazing place and very different than Mizzou. The Exchange Student Office helped me adjust, by guiding me through the process of organizing my classes, settling into permanent housing, and making the transitions required of an American student.

The classes at THU are really different from back home. Here, group work is emphasized, which at first, honestly, terrified me. I consider myself pretty independent in my work and hate relying on others for a grade. However, the great thing about the group work at THU is that the home students have done it for 2+ years and are very good at managing their tasks. So I’ve tended to follow their lead and I’ve learned how to take on both leadership and backseat roles.

On top of that, I’ve also learned how to work with people from all over the world. One of my groups consists of students from the Netherlands, Canada, the Czech Republic, Germany, England, Turkey, the United States and Brazil, helping me to improve my global communication skills, and my knowledge about different countries and cultures.

My favorite class is Public International Law; no surprise to those who know me. In addition to reading legal cases and learning about international treaties, we are given weekly practice case studies and assigned roles for analysis as members of specific parties to the various conventions, then we have to act as “legal experts” on the cases, with the professor ultimately deciding which legal expert is most correct.

The Decision Making in the EU class included a trip to Brussels to tour the European Parliament. The class is centered on engagement in a political simulation. I am a member of parliament representing the EPP, a conservative party in the EU. We work within our party’s framework and form alliances with others to try to pass legislation on various EU-based issues. Interest groups lobby us and buy us coffee, and we host meetings and vote on amendments—the whole package.

Living in The Hague puts you in a place where the world is within easy reach. I am a mere 50 minutes from Amsterdam, 15 minutes from Delft, Leiden and Schevengen, and just three hours from Paris.

I have even had the opportunity to volunteer at an organization called Gender Concerns International, which monitors elections around the MENA region and Central Asia to ensure that all genders are represented in national elections. This year they were invited to monitor elections in the Netherlands as a tribute to the 100-year anniversary of women earning the right to vote in Holland, giving me the chance to serve as an international election observer on March 15, an opportunity of a life-time.

It’s only been six weeks and I could write a novel on everything I’ve observed and learned in The Hague. I love it here, and I’m already dreading the day they’ll force me to leave.

Anyone interested in participating in the Mizzou-The Hague University of Applied Sciences exchange program should contact Dr. Bowers in the Honors College for more information. The program is arranged so that students only pay MU tuition and fees and housing costs in Den Haag, making it as affordable as MU.