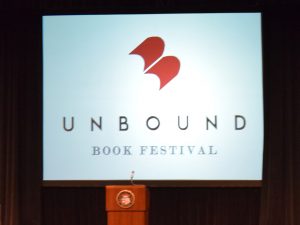 The interaction of people with the literature they consume often ends when they turn the last page of a book; there is an immediate thought of satisfaction or unease, and then it is set aside—for either the next commitment or the next piece of literature. Reaching out to authors for answers consists of checking their Twitter accounts or websites.

The Unbound Book Festival changes this dynamic. Reading is no longer a solitary experience. This is especially true for the University of Missouri honors students who participated in the university’s Unbound Tutorial, in which each section read several of the festival’s featured authors.

Tutorials offered through the MU Honors College usually consist of no more than five students who study with one or more faculty on a specific topic for a semester, earning one or two credits.

The Unbound Book Festival was held in Columbia, Missouri, on April 21-22. British Indian novelist Salman Rushdie spoke at MU’s Jesse Hall on Friday, with other author talks and panels held at Stephens College. 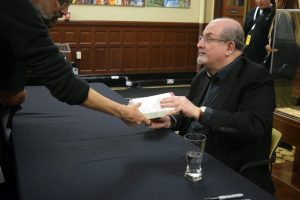 “We live through the stories we tell ourselves about ourselves,” Rushdie said during his talk.

Readers do not always account for the stories in an author’s life that may have influenced the story they decide to tell.

Take, for example, Molly McCully Brown, the author of The Virginia State Colony For Epileptics and Feebleminded. The collection of poetry is harrowing enough on its own, detailing the lives of physically and mentally disabled individuals in the colony in the 20th Century. No mention of her own being in a wheelchair is in her biographic information. However, when she reads the words “it was my backyard, but not what happened to my body,” there is new meaning given.

The MU students who participated in the Unbound Tutorial in the Spring 2017 semester had both the advantage of witnessing the authors in person, as well as having a go-to group of dedicated readers with whom they could discuss the literature. Although different tutorial groups read various pieces of literature, all had the opportunity to interact with or see the authors at the festival.

It is easy, sometimes, when immersed in a world of fiction, to forget that a real person built it. It is easy to forget the truths that influenced the stories. Seeing the person responsible for twisting hearts and boggling minds changes this.