Between the end of the Civil War and the passage of the civil rights acts of the late 1960s, African Americans endured a century of sustained repression, denial of voting and other rights, and the terrors of lynching. Columbia experienced two lynchings, that of George Burke on September 17, 1889, and of James Scott on April 29, 1923. Although these stories and the broader era of repression and the lynchings that took place have long been known to scholars and African Americans, it has only been in the past few years that they have gained wider recognition.

With the opening of the The National Memorial for Peace and Justice and The Legacy Museum, both in Montgomery, Alabama, the Equal Justice Initiative and MacArthur Genius Grant recipient Bryan Stevenson, have brought that history into the public’s awareness.  The museum and memorial have quickly gained notoriety as sites to be visited and experienced.

At the University of Missouri Honors College, learning extends far beyond the classroom. Recognizing the value found in experiential learning, the Honors College provides unique extended learning opportunities for its students.  Two years ago, the College also took ten students, who were enrolled in a class on African American history, to the opening and first-day of tours of the National Museum of African American History and Culture.

This September, students from the Stamps and Brazeal Scholars cohorts took advantage of these learning opportunities by traveling to Montgomery, Alabama.  On this trip, students delved deeper into the history of racial injustice in the United States by visiting the Equal Justice Initiative Legacy Museum and the National Memorial for Peace and Justice. The mission of this trip was for students to expand their perspective on the social injustices faced by African Americans and the role they have played, and are still playing, in American history.

Prior to the trip, students read “Just Mercy”, a memoir written by Bryan Stevenson, a highly acclaimed lawyer, social justice activist and founder of the Equal Justice Initiative. “Just Mercy” covers Stevenson’s work in fighting for justice and defending numerous wrongly condemned African American men, women and children.  Stevenson’s memoir unveiled many commonly occurring racial injustices that students were unaware of. According to Sophomore Stamps Scholar Anna Merkel, the memoir gave her a new perspective on a topic that she often overlooks.

“Before reading Bryan Stevenson’s memoir, I had not put much thought into the death penalty,” Merkel said. “Reading ‘Just Mercy’ taught me so much. It had a profound impact on me and my beliefs.”

After reading and discussing “Just Mercy”, the group was ready to head to Montgomery.  The first stop was the EJI Legacy Museum. Opened in April 2018, the museum was founded in an effort to expand America’s exposure to the country’s history of racial injustice. Merkel touched on how the museum broadened her growing knowledge about the manifestation of racial injustice in America.  “I was aware of the problem of mass incarceration, especially of black people in America, but our visit to the Legacy Museum really brought into perspective the ties between slavery, lynching, and the current epidemic of mass incarceration,” Merkel said. 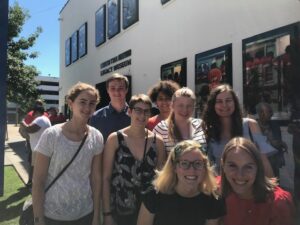 Stamps Scholars outside of the Equal Justice Initiative Legacy Museum.

Following their visit to the museum, the cohort traveled to visit the National Memorial for Peace and Justice. The memorial is an artistic commemorative memorial for the many lives lost through the racial terror of lynching. While powerfully beautiful in and of itself, what makes the memorial truly unique is the change that it aims to inspire. 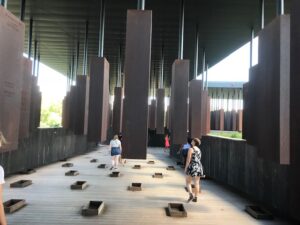 Stamps Scholars walk through the National Memorial for Peace and Justice.

The trip to the had a deeper meaning for freshman Stamps Scholar Delanie Vinzant. Through both the museum and memorial, Vinzant was exposed to the role her hometown had played in the nation’s racial terrorism.  “Seeing pictures of the lynching in my hometown, Mayville, Missouri, at the Legacy Museum really opened my eyes to some of the gaps in my own education,” Vinzant said. “Since the trip, I’ve been looking into ways I can raise awareness about inequality in my own community.” 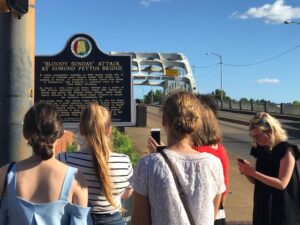 The experience cultivated deep conversation and reflection between the scholars on the past and what their role as leaders and advocates for change could look like moving forward.  Once they returned to Columbia, the group shared in their newfound knowledge and inspiration for change. Sophomore Scholar Caitlin Kelleher passionately expressed the value of the trip as a whole.  “The weekend in Alabama was eye-opening, to say the least,” Kelleher said. “I learned so many things I failed to learn in school. I encourage anyone interested in gaining a better perspective on civil rights and our history to make a trip to Montgomery. It was very well worth it.”