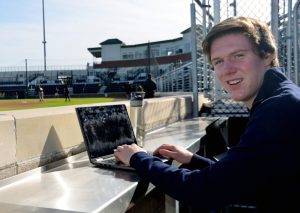 The tension between “mathletes” and athletes is one that doesn’t have to exist, according to Show-Me-Scholar freshman Matthew Kane. The triple major in statistics, mathematics and economics from Chesterfield, Missouri, has found a way to combine math and athletics by doing data analysis and statistics for the Mizzou baseball team.

Kane, a longtime baseball fan, has been calculating stats for pro teams in his free time since he was a kid. What started off as a childhood hobby has transformed into a career aspiration that Kane hopes to further develop during his time at MU.

“The movie ‘Moneyball’ is what kind of inspired me to take it to the next level and involve math,” Kane says. “When I got [to MU], I went to a Show-Me-Scholars meeting and [Honors College Director] Dr. [J.D.] Bowers encouraged me to reach out to the baseball team. It turns out they were looking for people to help them with analytics so it worked out perfectly.”

Kane works 15 hours a week combing through data and compiling stats for the team. He spends about 10 of those hours each week at Taylor Stadium, forming relationships with the coaches and players. He makes it to the field three days a week and works to analyze data from home the rest of the time. The data he analyzes comes from a radar technology machine called a TrackMan.

“TrackMan is a video pitch recorder that takes pictures of the ball.” Kane says. “It tracks everything about the pitch: location, speed, velocity, accelerations and spin. I’m going through data like that and then using it to create my own analytical tools to give to the coaches to evaluate players. The more data you have, the more you know.”

Though Kane does not receive monetary compensation for his work, the pay off comes from the knowledge that this experience will help him to gain skills, land internships and propel him toward his goal of working with the pros.

“I enjoy it so I don’t mind,” Kane says, referring to the unpaid hours he puts in compiling stats for the team. “It’s what I’ve always done and found interesting, and I like how everybody is willing to listen to it and wants to hear about it. It’s kind of fun that people actually care about what I do and realize that it’s not just the nerdy hobby that other people think it is.”

He plans to continue doing analytics for the team throughout his undergraduate years, regardless of if he gets a paycheck for his work or not.

The lessons in perseverance and dedication Kane has learned through his role with the baseball team have inspired him to share words of wisdom for other students who are working hard to reach a goal.

“Never be afraid to reach out and give it a shot,” he says. “What I’m doing for Mizzou is what I’ve always wanted to do, and hopefully I’ll continue it with a pro team or go high up in general management somewhere. Always take a chance because you never know what could happen.”