The MU Honors College recently hosted its second annual Stamps Scholars Weekend, a two-day series of events that brought 26 Stamps Scholars finalists to campus for interviews, lectures, research presentations and tours. These potential scholars were narrowed from a group of more than 325 applicants and are competing for seven final offers from the Stamps Foundation and the Honors College.

“It’s an impressive, impressive group of students,” said Honors College Director J.D. Bowers. “They are doing things that show true service to their community and outstanding academic achievement, and they’re really well-balanced in their commitments and achievements.” 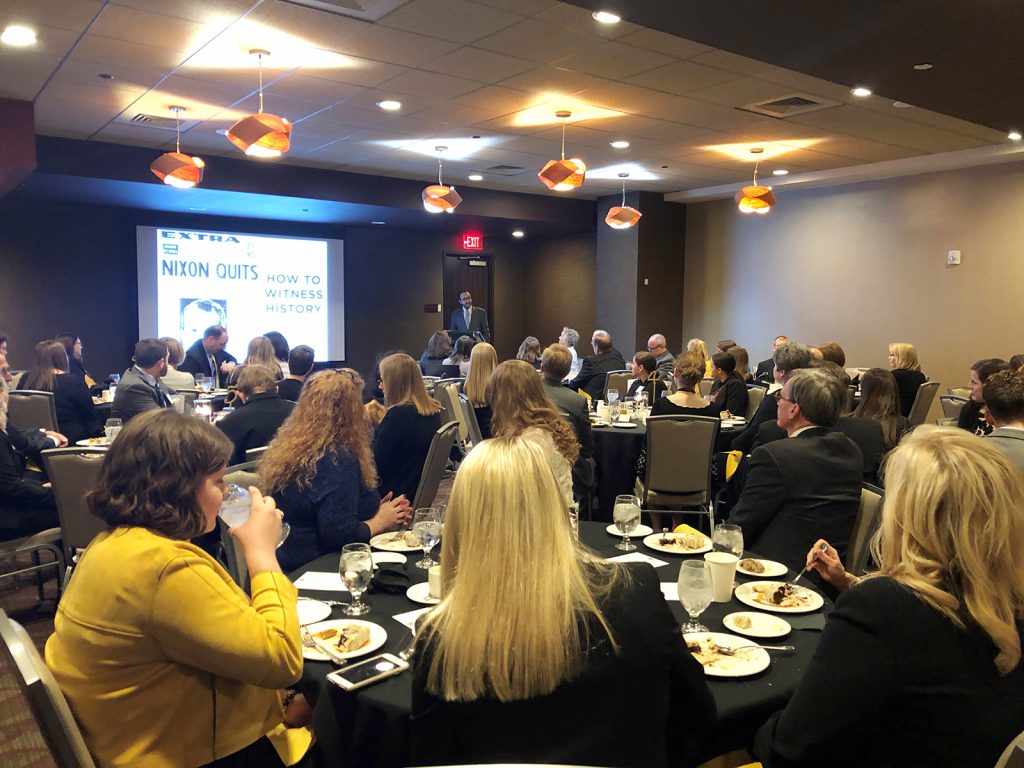 The Stamps Scholars Program is a prestigious merit scholarship program active at 42 universities nation-wide, with MU joining as the most recent partner in 2016. The Stamps Family Charitable Foundation sponsors the program, seeking to elevate the level of achievement among highly talented undergraduates through leadership, service and academics, and providing extensive funding and a range of benefits.

At MU, Stamps Scholars receive not only a four-year full scholarship, but access to a $16,000 enrichment fund to be used by the student over their four years as a scholar. Stamps Scholars, who must remain enrolled in the Honors College for all four years of their undergraduate studies, are also paired with a faculty mentor to guide them in their research and are advised by not only their major adviser, but also by the director of the Honors College.

The finalists for the 2018-2022 cohort came to campus from nine different states, ranging from California to Ohio. Their weekend began with a Friday night reception at the Broadway Hotel where MU Chancellor Alexander Cartwright greeted the finalists and their families.

“It is great to be with such high-achieving learners,” Cartwright told those in attendance. “You are the reason we do what we do, and you are examples of the power of higher education to change lives.”

Cartwright was followed by Matt Pearce, a reporter for the Los Angeles Times and an MU Honors College alumnus, who gave the keynote speech. Pearce graduated from Mizzou with a BA in English (’08) and a master’s degree in journalism (’11) and offered advice to the finalists about life after MU. He explained the six steps to launching a successful career upon graduating, urging the finalists to learn from others, serve others, be aware of the stories of others and take action for others even when the situation might be uncomfortable or challenging.

Saturday began with a welcome breakfast at the Reynolds Alumni Center before the finalists and their guests attended a number of academic sessions and meetings with a variety of MU students and faculty. A large focus of the weekend was on the research possibilities for undergraduates, especially for first-year student scholars. Marjorie Skubic, a professor in the College of Engineering, spoke to the finalists and their family members about what sets the research opportunities at Mizzou apart from those at other universities.

“One of the strengths of MU is that we really are a campus and University with unmatched opportunities for collaborative research,” Skubic said. “We have so many programs, centers, partnerships and resources that the other Universities, quite simply, lack. That allows us to be cutting edge.”

“My goal is to see all 26 finalists come to Mizzou,” Bowers said. “I know that’s ambitious, but we are showing them the best of what the University can do and giving them an introduction to so many people on this campus. It’s a marvelous experience.”

The Honors College selection committee must narrow the finalists to a smaller cohort of seven, and formally nominate them to the Stamps Foundation. The seven chosen will interview with members of the Foundation via Skype before the foundation informs the Honors College of those to whom they can extend formal offers.

The chosen Scholars for next year’s incoming class will join the first-ever cohort of four students—Madi Winfield (journalism), Anna Merkel (engineering), Toyin Jackson (food science) and Caitlin Kelleher (biology). Each of those four is involved in a research program, planning a day of service, participating in several outreach and alumni events, and making plans for enriching their experiences through the support of the Stamps Scholars Program.

“These are the students who will set the pace for Honors, for the campus, and leave a lasting legacy,” noted Interim Provost Jim Spain. “And they will give back to our community in so many ways, and inspire change.”

With those expectations and the commitment of support, the Stamps Scholars Programs is likely to exert a significant impact on the future of Mizzou.