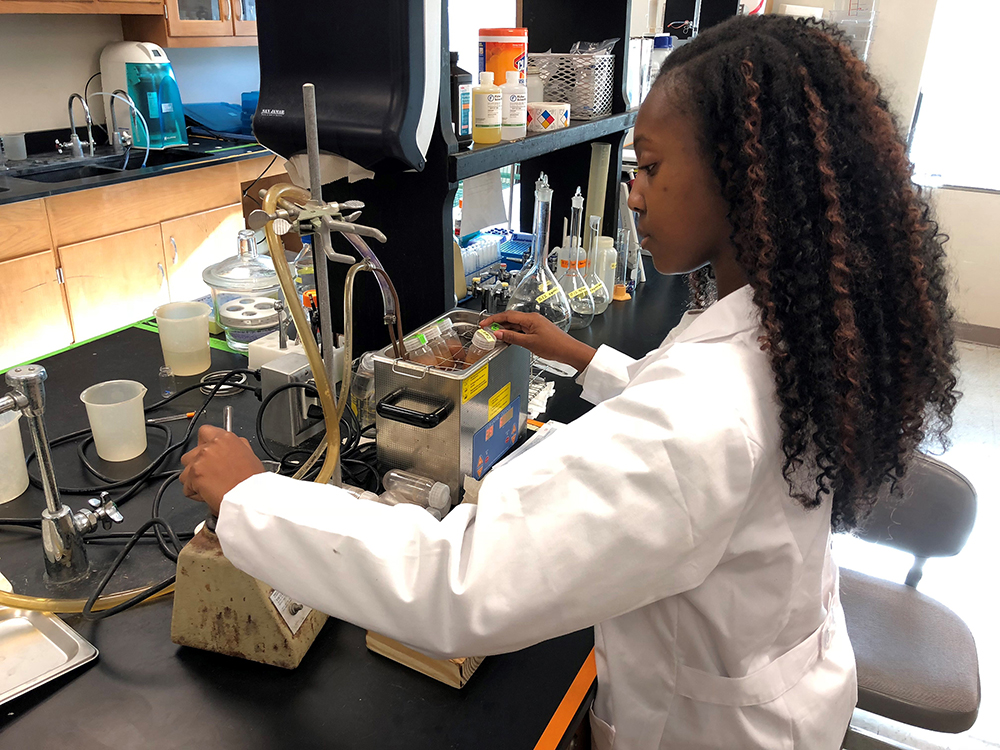 Toyin Jackson conducts research that examines how to change the bitter components in chocolate without adding a large amount of sugar.

Through the Stamps Scholars Program, freshman Toyin Jackson conducts undergraduate research with Alan McClure, founder of Patric Chocolate and doctoral student in the Department of Food Science. McClure founded Patric Chocolate in 2006 and the company has emerged as leader in the craft chocolate industry. Jackson is working with McClure to research the unique bitterness and health benefits of chocolate.

Jackson sat down for a Q&A session to discuss her “sweet” research placement.

Q: Why did you decide to come to MU?
A: I’ve never been to a school that had so much tradition since my high school was really new. I really liked how proud people here are of the traditions and I think that’s kind of what drew me to it. I’m also a big sports person and I wanted to go somewhere with a big sports life, so I really appreciated that about Mizzou.

Q: What are you studying?
A: I’m majoring in food science and minoring in business.

Q: Why did you choose food science as your major?
A: For a while, I wanted to be a doctor. When I got to high school, I realized I didn’t really want to do that but I still wanted to have a career that helped people and I also believe in preventative medicine. I may not necessarily become a food scientist, but I’ll definitely have a job in the food science world. With my business minor, I’ll probably be a food marketer who advocates for healthier products. I think preventative medicine is the future of the industry and making food that’s healthy for people so they don’t have to go to the doctor is kind of what drives me to want to do this.

Q: What has been the best part so far of being in the Stamps Scholars Program?
A: The people that I’ve met have been pretty cool. I got to meet Andrew and Peggy Cherng when they were here for Homecoming. I’ve also had a lot of fun so far with the research and feel like I’m going to learn a lot from it.

Q: How did you end up getting involved with Alan McClure’s research project?
A: I went to talk to a faculty adviser in food science, Dr. (Ingolf) Gruen, and he was telling me about some of the research his PhD students are doing. When he mentioned Alan and the chocolate research he’s doing, the chocolate just kind of sparked my interest. I met with Alan and he asked me a couple questions, and then he was willing to kind of let me go under his wing and learn. We used to meet two days a week, but now the sessions are one day a week from 9 a.m. to 1:30 p.m., so that’s a pretty good amount of time I get to learn. So far it’s been a lot of research and reading because chocolate is really complex. I’ve also been watching him do a lot of lab techniques and he allows me to try them sometimes.

Q: What is your research focus regarding the chocolate?
A: Alan McClure is doing a three or four-year project trying to find out how to change the bitter components in chocolate without having to add a bunch of sugar.

Q: What is your favorite part about the research so far?
A: I think getting to watch Alan do the techniques and then getting to do them myself is my favorite. There’s definitely a difference between being in a class and getting to actually do the research. I know I have so much more to learn, but I’ve already learned a lot so far, especially about just the precision that it takes to conduct a research project like this. I appreciate the learning process because I know it will benefit me in the long run. For now, I have been reading books on the history of chocolate and all its components. I don’t know when we’re going to get into taste testing because you have to do all the science before you can start to create and manufacture a product, but I am excited for that part in the future.

Q: Can you describe a typical day in the lab?
A: I usually go in and we talk about what I read that week for a few minutes, and then we get right into it since we want to utilize the time that we have. I am still learning his process on the days that I’m with him because he has to teach me a lot of stuff. He does things and tells me why he’s doing them and how he’s going about doing it. Basically we get the lab coat and goggles on and we’re just kind of in it until about 11:30 a.m. Then we take a 20-minute lunch break and come back and get as much done as we can until I have to leave at 1:30 p.m. for class. It’s a lot of hands on work and I think it will get more hands on as we go. Alan told me the more experienced I get, the more he’ll want to help me take on more responsibilities, so that will come with time.

Q: What is the most important thing you have learned through doing this research?
A: I think the most important thing that I’ve learned is probably the time and dedication that you have to put into doing a research process, especially one that is going to be published. I’ve learned a lot about precision and everything you need to do to make sure a study is accurate. It’s a lot of work, but I’m a detailed person so I don’t mind it.

Q: How has Alan McClure served as a mentor to you?
A: He is really cool. He tells about when he was an undergraduate and assures me that it is okay to not know what I want to do because he didn’t know at that time either. He’s relatable and not just an authority figure in the lab. He can laugh and joke and be casual, but I respect him and listen to him when he’s teaching me or telling me to do something. It is also cool to talk to him because he owns his own business and since I want to go into the business field, it’s nice to get that kind of perspective.

Q: What is your future career goal?
A: I am in the process of finding that. I don’t want to say that food marketing is my absolute dream job if I don’t even fully know what that entails yet, but I know I want to do something where I’m making a difference that I stand behind. I’d hate to work for somebody whose company and principles I don’t agree with.